See also  Anna Camp isn’t saying ‘No’ to Pitch Perfect. What she has to Say then??
Menu

See also  Anna Camp isn’t saying ‘No’ to Pitch Perfect. What she has to Say then??
Search 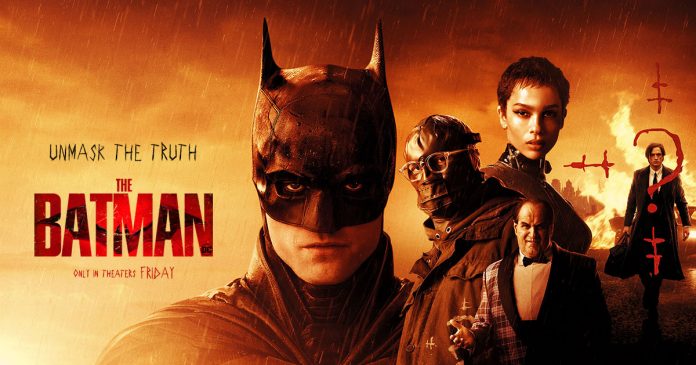 Will it come close to Spider-Man: No Way Home?

We are 2 days away from The Batman’s release, and the film industry is predicting how much the movie will make. The last movie to shake box office records was Sony’s Spider-Man: No Way Home with a $1.85 billion global collection. Can the Dark Knight triumph over it or come close to it in numbers?

The Batman is Warner Bros’ first film in a long time to release exclusively in theatres since 2020. Industry projections expect the movie to collect $115-$125 million domestically. Overseas estimates rank between $225-$245 million or more. With a budget of $200 million, it is clear that The Batman can easily collect much more than that.

The movie already came out on Korea today, and collected $1.7 million. This makes it Warner Bros. best opening in Korea since the pandemic. The Batman comes second to The Dark Knight Rises if we are ranking by Batman films. By Friday, we can expect a much higher number to arrive from Korea.

As for opening week collection in the United States, Warner is looking to get $90 million. The Batman will open at 4,217 theatres, or 12,500 screens on Friday. It will be difficult for it to come close to Spider-Man: No Way Home, but the hype is still unreal.

See also  B: The Beginning: What does season 2 have in store? Check out all the latest updates on this Netflix anime.

Why The Batman will win big

The Batman is close to 3 hours, and hence brought doubts of lesser audience. However, that won’t be the case. Covid cases have dropped by 65% in the United States since last week. Moviegoers won’t hesitate going at peak times. The movie also received $40 million in ticket pre-sales for Thursday and Friday shows. It was certified fresh at 87% by Rotten Tomatoes, and will be available in all formats to watch, such as Imax, Dolby Cinema, 4DX, Screen X, Drive-ins and motion seats. Plus, it’s Batman.

See also  Agents of SHIELD: When is Season 7 Expected to Arrive?