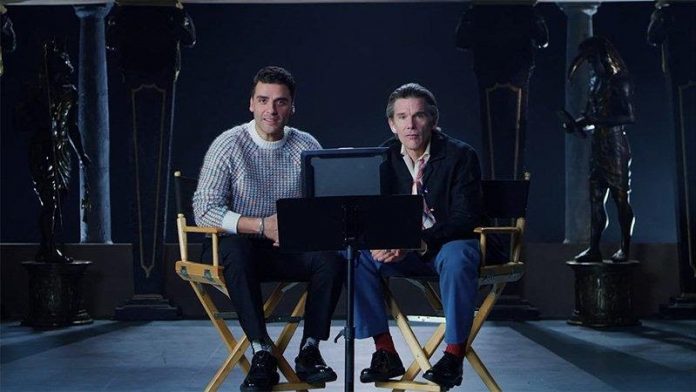 The highly anticipated trailer of Marvel Studios’ Moon Knight is out, fans got to see the twisted and exciting new direction that the series is going on Monday. Someone who is just as excited as the fans is lead actor Oscar Isaac, who plays the vigilante suffering from dissociative identity disorder.

Following the trailer release, Marvel has dropped a video of Isaac, along with co-star Ethan Hawke reacting to the trailer. We also got to see a picture from Isaac’s filmmaker wife Elvira Lind’s Instagram of the star and his friends tuning into Monday Night Football to catch the trailer premiere.

In Lind’s photo, we see the couple, along with some friends sitting in front of the tv with wine and snacks. Oscar can be seen in the centre looking intently at the television.

We then got to see the video of the actor with Ethan Hawke reacting to the trailer of their show. This was a new trend that Marvel began, starting with Spider-Man: No Way Home that had the lead stars reacting to the trailer. Trailer reactions has been a thing for ages, and having the stars react added to the excitement. Specially in Marvel’s case, the secrecy regarding projects are high, and even stars are often handed a fake scripts or scripts that do not tell the full story.

Moon Knight has a very broad story to explore, and with his identity disorder, it becomes broader. In the trailer, we see Isaac playing Steven Grant, a British gift shop employee at a museum. We see him speaking in an English accent, which Isaac mocks while watching the trailer. However, he realizes that his real name is Marc, and that Steven was simply one of his personas.

Either way, both Isaac and Hawke are very excited about the show, and can’t wait like the rest of us for its arrival on March 30.

Also read: MANIFEST SEASON 4 IS ARRIVING SHORTLY – HERE’S EVERYTHING TO KNOW BEFORE ITS RELEASE

Previous article
Bad Crimes: Netflix Announces New Animated Show from the Creators of ‘The Office’ and ‘King of the Hill’
Next article
Judgement: Live Action Series of the Yakuza Spin-off Game Reportedly in Development, Lead Star to Appear