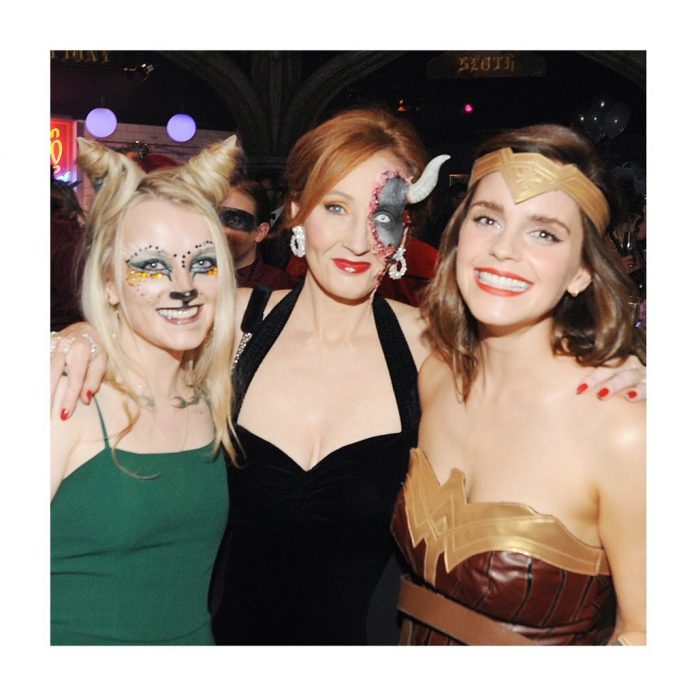 After 20 long years of their meet, the actor who portrayed the character of ‘Hermoine’ in the films based on J.K Rowling’s infamous series of ‘Harry Potter’, Ema Watson posted a photo featuring herself, the author and the ‘Harry Potter’ co-star, Evanna Lynch on the 54th birthday of the latter.

They first met on the sets of audition for the character of ‘Hermoine,’ one the two best friends of Harry Potter when Emma Watson appeared for the screen test for the Harry Potter film franchise. J.K Rowling, the author of the series, stepped onto the 54th year this week. Emma was nine years back then; now she is 29.

In a picture clicked at a costume party, Emma was seen dressed as Wonder Woman whereas Rowling, dressed in a black halterneck dress with an evil half-faced makeup. The fake horn protruding from her left forehead perfected her look. Evanna works a green dress with spaghetti straps along with a feline-like makeup.

Sexy and scary! 👻 You smashed this. All the love to you Jo. Happy Birthday!!!! Extra points to @msevylynch for being the most perfect cat. 🐯

Fans of the Harry Potter franchise went crazy after the social media upload took place. They were delighted to spot the author-actress duo together. The picture was flooded with comments by the fans expressing their excitement. Some of the comments were “THIS PICTURE MADE MY DAY,” “Omg I’m crying happy tears.”,”Thirty points to Gryffindor”, “Emma Watson is the Wonder Woman we never knew we needed.”

The exact location of where the picture was taken is not known. Reportedly, it may have been clicked at a Halloween Party in any of the by-gone years.