More
HomeEntertainmentUmbrella Academy: A Look at the Famous Characters of the Fantasy Drama...

Umbrella Academy: A Look at the Famous Characters of the Fantasy Drama that Makes the Show Enthralling to Watch 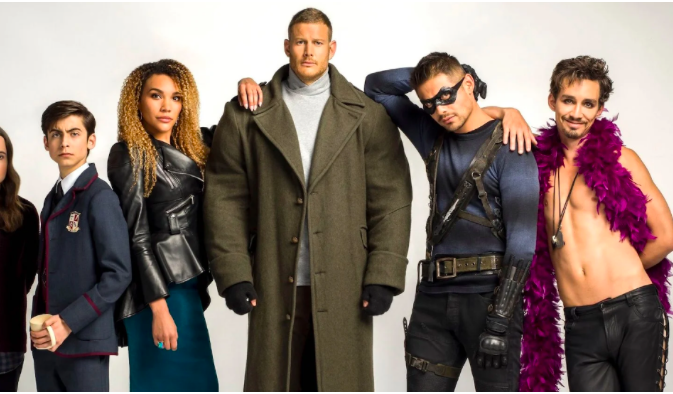 Umbrella Academy, a very famous Netflix series that was released in 2019, has had a total of 1 season till now. however, the plot is very interesting. a billionaire, Reginald Hargreaves, adopts seven children who were born to random women, who were not even pregnant, trains them to save the world, and works hard for it. but when he sees nothing working, he commits suicide with an aim to bring these 7 siblings together for a mission.

Mentioned below is the description of some of their character sketches.

Also called a space boy, and is the number one sibling .he has a lot of popularity because of the superhuman strength he possesses.  He was the youngest person to go to space, which makes him special.  Also he has white hair, which makes him look different from the other siblings.

What makes him stronger is that his body is shaped like a gorilla because of which he felt disgusted in himself, he felt he was not his real self now but a monster, he does not just have tough skin, but also is strong internally.  He was the favorite of sir Hargreaves.

He is one of the strongest siblings of the family. He was the only one who did not care about the family and left the academy, to make his own identity in the society.

To keep away from his family, he stays in a boxing club and works there, as he is highly trained in martial arts.

He was never perfect while speaking and has some issues such as stuttering.  He is not on good terms with Luther, because of the comparison factor. But he does love his other one Klaus, who is addicted to drugs and works on helping him out to get away with it.

He was the one who killed their mother which no one knows till now.

He was the number four sibling, and had several abilities in him to save the world. He had the special power in him to speak to the dead, which made him different from the other.

He was the kind of person who never gave up, and always gave his best.  Fans think he should be the number 1 sibling rather than Luther. He has all the better powers, he even has the ability to possess people.

He does not love himself enough and considers himself of no self-worth. He is a very big drug addict.

She is the ordinary sister of the siblings, whose revolution throughout has not been easy, but has been more dramatic throughout the show. She was the one who named herself, and believed in Brazilian culture being born in Russia.

Talking about her love life she falls for Harold Jenkins, who was also a famous character of the show.

He is the sixth boy, among the siblings. He was on good terms with almost everyone, and his superpower included his abilities to control tentacles which were in his stomach, it was an ability which no one else possessed.

He was the one who commits suicide, the reason for which is however not specified but some sources/fans reveal maybe it was because of his father, when he got to know the truth.

She was one of the siblings brought by Reginald Hargreaves.  She had the ability to make the whole world work with her will, she was so strong. But however, when her vocal cords get damaged, she loses her voice which becomes hell for her life

She was the character who was scared by nothing, and had good relations with sister Vanya and even used to discuss everything with her, even her starting romances.

Without him the story could not just exist. If he wasn’t here, no one else would earn the siblings when they overused their superpowers, so he played a very crucial role.

Even though he helps them, he is not much known because his power which included traveling within space and time, was a general thing and was not unique.