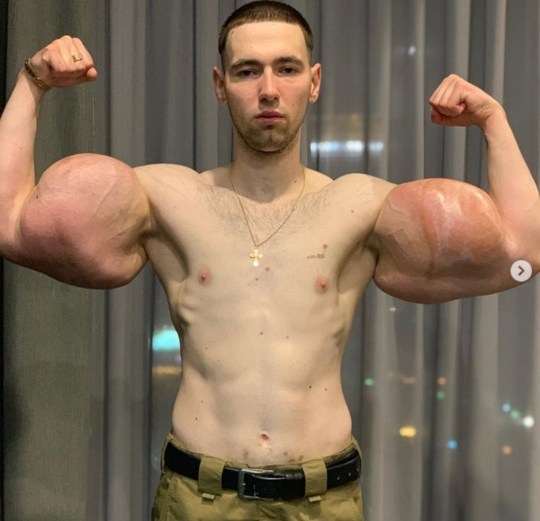 Bodybuilding is all fine until you become too obsessed and want to have gigantic, scary-looking biceps. This is exactly what a former Russian soldier Kirill Tereshin did. You might have heard a lot about Russian bodybuilders, but this ex-military. Man has just tipped the scales.

News has it that Kirill Tereshin used “Petroleum Jelly” injections, or Synthol oil, to enhance the size of his arms, which, before surgery, were said to be a horrendous 24-inches around, which is monstrous. Kirill Tereshin was admitted to First Moscow State Medical University in the Russian capital. Surgeons said that they removed a gigantic 3Lb of dead muscle and three whole liters of petroleum jelly that had all become a giant lump.

And moreover, lead surgeon Dr. Dmitry Melnikov said his team was only a quarter of the way through the whole surgery. Dr. Melnikov mentioned that it would take three more long surgeries for all of the Vaseline-like jellies to be expelled from his Kirill’s arms.

This bodybuilder was trending quite a lot on social media sites and video-sharing platform YouTube. He found global fame for his fake bulging biceps. The surgeon said, ‘The problem is with the petroleum jelly. You inserted it so thoroughly that it totally spread in the muscle and ultimately destroyed it.’

Alana Mamaeva, 32, an active campaigner for victims of botched up plastic surgeries, persuaded Kirill to undergo immediate treatment. Kirill had been told he would have arm movement, but the muscles in his arms will disappear.

Dr.Melnikov said that the implants were causing him ‘high fever, sharp pain, and weakness.’ The surgeon added, ‘I think Kirill did not fully realize the mistake and consequences he had to face.’

In Russia, plastic surgeries, including injecting harmful petroleum jelly, are becoming rampant in the youth, especially with people seeking fillers.

The surgeon later said that he had seen patients before who had injected the harmful petroleum jelly into their breasts, buttocks, and faces.

Previous article
MIRACLE CONJOINED TWINS BORN WITH 2 HEADS AND 3 ARMS!!
Next article
The Apprentice: The famous dread cafe- Bridge Cafe is a real place to for Loosers?? Deeds inside!