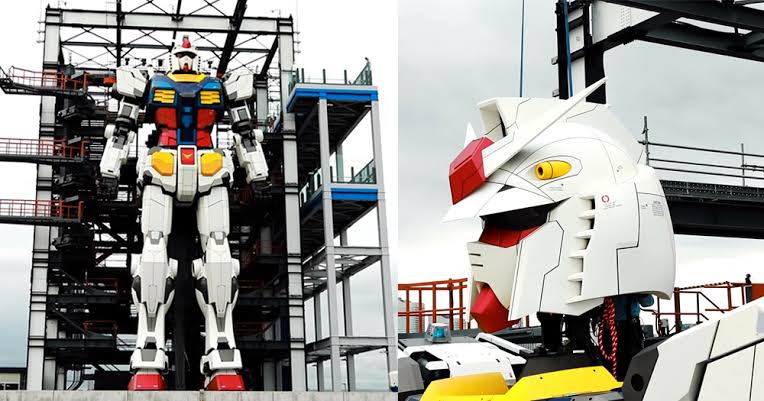 Proud moment for fans of the anime series

A clip recently went viral of a 60 foot, 25 tonne robot kneeling down, and getting up, then pointing it’s fingers up in the sky. For those who are not familiar, it’s just a giant robot that Japan is building for the heck of it, but for anime fans, it’s a whole other story. This here is a Gundam robot, built at the Gundam Factory in Yokohama, Japan.

The robot was actually completed on July 29, 2020, and the Shinto priests blessed the robot’s head in a traditional construction ceremony called “Jotoshiki” before it was attacked to the body with a building crane.

The Gundam series, created by Sunrise Studios was Japan’s entry into the mecha genre where humans pilot these giant robots for war. The stories were always set in the future, and showed planets that were constantly engaged in war, and the government has moved on from regular armour and artillery, and has started investing in these robots. These gigantic Gundam frames gave inspiration to the Megazords in Power Rangers and Transformers. The anime got widely popular and soon made its way to novels, video games, movies, TV shows, etc. The anime list in itself is quite long and currently contains seven different timelines.

By the way, this isn’t the Yokohama factory’s first rodeo in building a skyscraper of a robot. They first built the RX-78 and was kept at Tokyo’s Odaiba district before being replaced with the RX-0 Gundam Unicorn. The event for the new Gundam was to be held in summer, but due to the coronavirus pandemic, it’s currently postponed to October 2020.

This new movie shows the origin of the ever famous “Black Hole” and how it all started! Check it out.
IOS 14 latest update: Iphone users can no longer use the Picture-in-Picture feature on YouTube without paying for it.