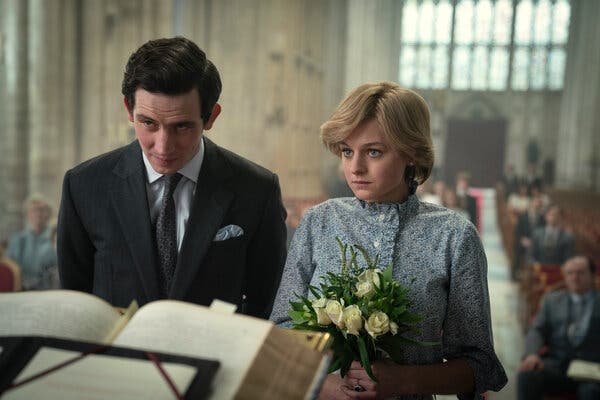 Season 4 of “The Crown” was released on 15th of November, 2020. This season of the series cover the time period of 1977 and 1990s. It is set in the timeline when Margaret Thatcher was the prime minister of United Kingdom. As for now, the fans of the series are really appreciating the work of costume designer of the show. Everyone who have watched season 4 of the series is really appreciating the work on costumes of  Emma Corrin and Josh O’Connor. Emma Corrin have portrayed Princess Diana and Josh O’Connor have portrayed Prince Charles in the series.

At initial stage, when Diana’s relationship with Charles was becoming public, she was often snapped by media on her way of teaching job. Below is the same picture of Diana both in reel and real life.

Below is the snap of when Diana was visiting to Brooklyn Academy of Music in 1989 in New York. Perhaps, now we know what a work customer care have done. The taffeta dress of Corrin is totally matching to that of Diana’s Vitor Edelstein gown.

After prince William was born, Diana with her baby had a royal tour of Australia  in 1983 . She wore a pink polka dot dress. Corrin was spotted in same manner of outfit on the sets of “The Crown” season 4.

Like Diana, Charles was also famous for his fashion sense. Prince Charles once wore a beautiful double breasted suit around 1980s and he was looking very dashing in it. Josh was also seen in season 4 in same style of suit.

Above all, below is one of the most beautiful picture of the couple from 1980s. It is one of the best work done by costume designers of the series.

Rebel Wilson is winning hearts in her new pictures in swimsuit. Read below to know more inside story
The Crown: Season 5 of the Royal Drama Series to Explore “Richness & Complexity” of Royal Family in Depth