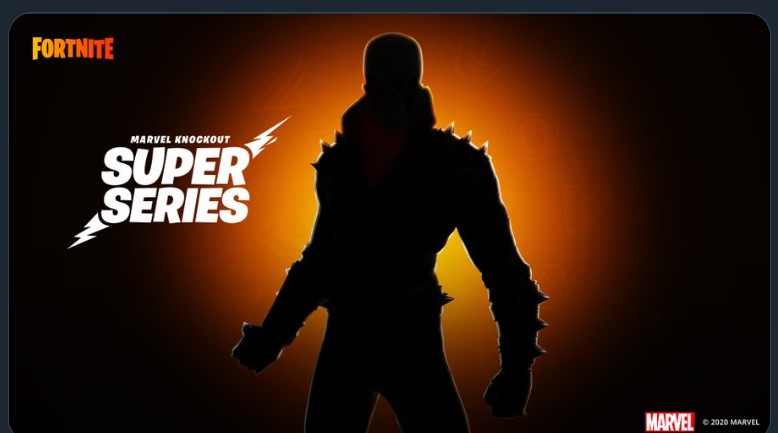 Fortnite has released a happy news for all the Marvel fans. In early October, Fortnite announced a new series known as “Marvel Knockout Super Series”. It is a tournament series where players can compete in Marvel Knockout mode. It is something very unique. The first Marvel character that joined Marvel knock out series was “The Daredevil cup”. It was first cup of series which was released on 14th of October, 2020.

So, the new skin has been teased by Fortnite and they have chosen Ghost Rider as their next character. Also, a BIG YES- Ghost Rider will definitely come with his stylish bike in the tournament. Fortnite announced the news by tweeting a promo image for upcoming round 2 of Marvel Knockout Super Series. There was a skull and a flame in the caption which obviously represent Marvel’s “Sweetest character”, Ghost Rider.

Since, Daredevil also had some of his tools it is sure that Ghost Rider will also get his own glider, back bling and pickaxe. Certainly only thing which is yet unrevealed is what superpowers Ghost Rider will have in the series.

What is Marvel Knockout Super Series is all about?

In the knockout series players compete in knockout mode. In knockout mode all the tools pf the player is taken away and they use only their superpowers. Above all, Fortnite has again started character teasing for 3rd round of the tournament.

Moreover, in first tournament top players were also gifted Daredevil skin before it was available for normal players. Similarly, Ghost Rider skin is also available in the store. Apparently, “Ghost Rider” skin release was announced by Fortnite on Twitter on November 8.

With my Pickaxe Frenzy tournament over for most regions – I wanna see everyone’s best clips and see who copped a free bundle! ⛏⚡️#LachlansPickaxeFrenzy

USA Elections 2020 Turned Out to be a Nail-Biter and People have Epic Reactions for it. Check Below for Some Laughter
F is for Family: The Show is Renewed for the Fifth Season with a Winning Plot. Details Below