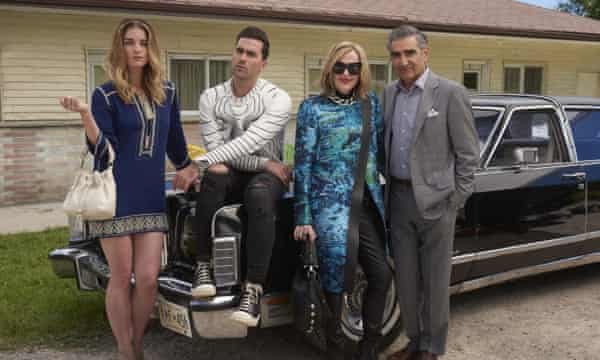 The Emmy Award winning TV, Schitt’s Creek is so popular and loved by the audience. It’s a classic sleeper success story and has won 9 awards. This is indeed a great achievement for any TV show. Here’s a few things that makes it so perfect and liked by people.

Catherine O’ Hara is an adorable actress who never fails to amaze us with her the charm she plays each of her roles. She plays Moira in the play which is one of the best works of the actress. Each and every minute details of her character makes the fans fall in love with her whether it be her dauntless self centeredness or even her wigs. The show shows the relationship between David and Patrick. Everything in their relationship is so normal, romantic and charming. This was a really important part in the show for the show’s creator, Daniel Levy. While it was also considered to be a significant change in the history of American television.

Schitt’s Creek is such a lovely, romantic and sweet show that the audience automatically gets happy watching it, just like the 90s rom com drama FRIENDS. However, you won’t get it when you begin watching the show. The family drama makes us understand the actual importance of a healthy relationship with each and every family member.

Not only Moira but all the cast members of the show are equally adorably dressed. Whereas, there’s no words to describe Moira’s collection of wigs which are known as The Girls.

These are a few reasons for the show’s popularity. However, the positive things of the show doesn’t just end here. There’s a lot more. Watch jt if you haven’t yet.

The ever growing fanbase of anime – What makes this Japanese artform so unique?
After a Mind-boggling Second Season, What’s Next for Hargreeves Siblings In Umbrella Academy Season 3? Check Out Below