More
HomeEntertainmentWhat can we expect from Stranger Things season 4? Read to know...

What can we expect from Stranger Things season 4? Read to know the release date, cast, plot and all other details.

Season 3 of the Stranger Things had a 77 minutes explosive finale. The end left us hanging with some serious doubts in our minds. Well, fortunately, the questions will not remain unanswered. The Stranger Things season 4 is all set to hit the screens to answer all those unanswered questions. 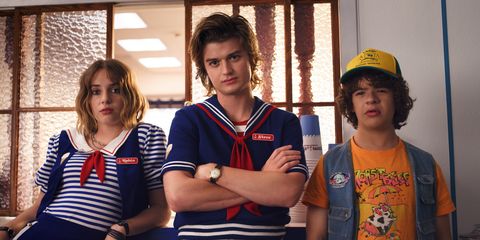 When will the show AIR?

The sci-fi horror show had the release of its first season in July 2016, the second season came in October 2017 and the third season hit the screens in July 2019. Now, if we look at the present scenario, we do not have an official release date for the fourth season. It will probably release sometime in this year or in 2021.

Is there a trailer for The Stranger Things season 4?

The first trailer for season 4 came as a Valentine’s gift for the fans. It was posted on Netflix’s Twitter page on 14 February, 2020. It shows the labors of the Soviet Union at a snowy wasteland. It seems like they are building a railway at that place. Do watch the trailer if you haven’t watched it yet.

The show has a huge cast. Eleven will be played by Millie Bobby Brown, Mike by Finn Wolfhard, Dustin by Gaten Matarazzo, Will by Noah Schnapp, Lucas by Caleb McLaughlin, Max by Sadie Sink, Steve by Joe Keery, Nancy by Natalia Dyer, Jonathan by Charlie Heaton, Robin by Maya Hawke, Joyce by Winona Ryder, Erica by Priah Ferguson, and Karen by Cara Buono.

What is gonna happen? The plot

Season 3 had a very emotional ending. Joyce, Will and Jonathan were shown leaving their home in Hawkins. This followed Hopper’s apparent death. The fourth season will reveal where they are going. Moreover, season 4 will show the gang reuniting and solving Hopper’s murder in spite of all the obstacles they face.