The Eye-catching Outfit of Kanye West in Silver turned out to be the center of attraction more then her opera “Mary”!! 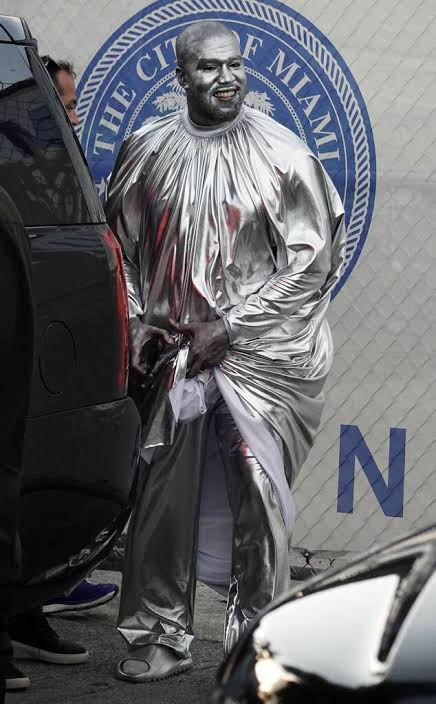 Kanye West, who is a famous rapper, also known as opera creator, went all out on Sunday at Miami, Florida, for his new opera named” Mary.”

The new-look of Kanye West

When it comes to the West family, they never fail to make an eyecatching entrance in public. On Sunday, Kanye West, too, managed to capture the media and public’s eyes in Miami. He stepped out at the Marine Stadium, wearing a sliver cape-like outfit, dressed from head to toe in silver, gaining the paparazzi’s attention quite effortlessly. It was not only the Rapper’s outfit that drew attention, but he even colored his entire face with silver metallic paint along with his fingers.
The 42 year-old star was in Miami for his Art Gospel and on the last day of the famous Art Basel art fair when he decided to bring his opera performance back. Seeing how he chose to dress up himself to promote his newest opera, Mary, he was seen to be very committing towards it. Along with the rapper, even the supporting characters and performers also wore matching robes from head to toe in sparkling silver.

What is Kanye west’s Opera about?

Kanye West was in Miami on Sunday to promote his new opera, titled,” Mary” along with his other performers and supporters. The opera retells the Nativity story, and the rapper took on the leading role of the Opera, unlike his first opera,” Nebuchadnezzar,” where he opted to narrate the show from behind curtains. This is his second collaboration with Vanessa Beecroft in this year.
The rapper and his performers too re-enacted some excerpts from the books of Matthew and Luke. The songs featured in the Opera were tracks collected from Kanye’s older catalog, “Devil in a New Dress,” “Love Lockdown,” I Thought About Killing You,”  Can’t Tell Me Nothing,” and “Power” as well as traditional Christmas medleys.

Previous article
Elon Musk and his new Tesla Cyber-truck doesn’t need an advertisement, Its just peoples choice!!
Next article
Marianne Williamson carelessness to fall for a hoax article and accusing Donald Trump fell back on her, Apologized later on!!