Marianne Williamson carelessness to fall for a hoax article and accusing Donald Trump fell back on her, Apologized later on!! 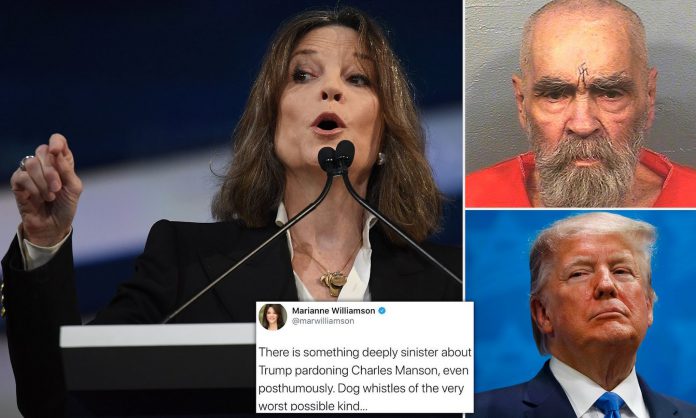 Marianne Williamson, who is a presidential candidate of America for the year 2020, fell for a fake and ridiculed post on Monday regarding the present president, Donald Trump.

The activist and author, Marianne Williamson, at 12:53 are of 9th December, posted in her twitter that,” There is something deeply sinister about Trump pardoning Charles Mason, even posthumously. Dog whistles of the very worst possible kind.”

Charles Mason is one of the famous criminal and cult leader in history who was responsible for killing nine people in California, including pregnant actress Sharon Tate during the year 1969. He was then sentenced to life imprisonment and died in the year 2017 in prison after serving more than 45 years of his life in prison. Although he was found not to be directly related to the murders, he was guilty of first-degree crimes as the perpetrator.

Marianne Williamson was a victim of the false post of which she did not check it’s originality before posting on twitter, claiming that the president has pardoned the serial murderer and cult leader, Charles Mason. It is not sure as to how or from where she got the hoax information, but many Twitter users claimed that a satirical article of the president pardoning Charles Mason appeared in 16 of November on a website known as moronmajority.com. Following that, the article was picked up by a popular news website called Daily Kos from where she must have read about it.

Netizens’ response to the false tweet was very fast, and they were furious. They criticized and pointed out her mistake, claiming that this never happened. An hour later, she deleted the tweet by stating an apology,” Glad to have been wrong,” but the screenshot of it has been already seized upon by other users. Later on, she deleted both the tweets.

Previous article
The Eye-catching Outfit of Kanye West in Silver turned out to be the center of attraction more then her opera “Mary”!!
Next article
Is Netflix actually letting go of Inside the Mind of a serial killer? If so, is is going to come on any other platform!!