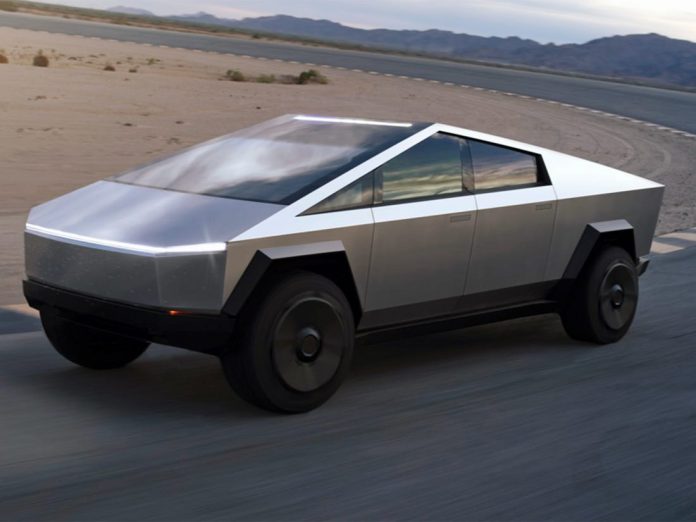 Elon Musk ‘bangs’ his new Tesla Cybertruck. Musk is pretty famous now after winning his case. He is even seen in Los Angeles dressed all good and cool. Musk actually brought a new Tesla Cybertruck, which has not been launched yet. So many people were confused as to how did he get to drive and own it. They even raised their opinions on how he is owning it. But the company revealed that a person can drive it through the streets and all as a test drive. So now the question is whether it was a test drive or not.

Anyhow even if it was test drive or not, the Cybertruck got hit. It was seen at a tony eatery in Los Angeles. This happened while he was getting out of the restaurant. He did not even stop it and went on. Some are saying probably he did not even see that he banged it so that is why probably he just drove off without stopping. The videos of the incident are on Twitter.

Many people are already excited to have and own this new Cybertruck. Already more than 30,000 people already booked for the new one, as soon as it is launched in the market.

The Cybertruck has so many features with it. It is, in fact, a good vehicle to have and own. Also, the look of the vehicle and the model of the Cybertruck is pretty cool.

The vehicle is 231.7 inches long 79.8 inches wide. Musk says that it can go 60mph in 2.9 seconds. Also, it has the capacity of having 6 people, which is actually pretty good because more people can travel together. The range as per the availability of the Cybertruck is 250+miles for the low end, 500+miles for top and so on. Mostly this is a great demand among the public. So once it is launched, it will be high in the market.

In one of the tween by Elon Musk, he clearly said that he doesn’t need an advertisement nor any paid endorsement and 146k Cybertruck orders so far.

With no advertising & no paid endorsement

Previous article
WhatsApp launched a call waiting feature and it looks like it can bring revolution in VOIP domain!!
Next article
The Eye-catching Outfit of Kanye West in Silver turned out to be the center of attraction more then her opera “Mary”!!