Marvel Universe Came Up with a Valiant Universe, ‘Bloodshot’. Check Out All the Requisite Details Here. 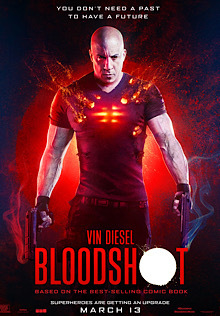 Vin Diesel, from the Marvel Universe, is now coming to Valiant Universe, where the actor is playing a character called Bloodshot. This is the first-ever adaptation of a Valiant Comics character that was premiered in March 2020.

Bloodshot is an ex-soldier with amnesia, who has pale white skin and several billions of microscopic supercomputers, called “nanites”. These nanites run through his bloodstream and allow him to heal wounds by regeneration. It was created by Kevin VanHook, Don Perlin, and Bob Layton, way back in 1992. It is one of the most popular leading characters from the Valiant Comics Universe.

Bloodshot was released on March 13th. It was first scheduled to release on February 21st but was pushed to a later date by Sony.

A trailer was released soon after the Comic-Con held at NYC, and is now available on YouTube.

Vin Diesel stars in and as Bloodshot and is joined by Sam Heughan, Guy Pearce, Talulah Riley, Toby Kebbell, and Lamorne Morris.

In 2017, Jared Leto was reported to have been roped in to play Bloodshot as Angelo Mortally. However, that did not work out. Leto was instead roped in to star in another superhero movie from Sony called Morbius.

Who is Bloodshot and What is Valiant?

Bloodshot is one of the most popular characters from Valiant, a popular comic book series. Valiant was formed by ex-Marvel editor Jim Shooter and Steven Massarsky in 1989. Bloodshot’s real name is Ray Garrison, or Angelo Mortalli, depending on which era of Valiant he belongs to. In the 1990s, Bloodshot was Angelo Mortalli, a Mafia hitman who was killed. However, in 2012, Bloodshot discovered his other identity, which was Raymond Garrison, who was previously a U.S. soldier.

Previous article
Onward: Avengers Stars Return Together Once Again, but this Time to Provide Voiceovers. Tom Holland and Chris Pratt Join the Voice Cast for the Animation Flick.
Next article
Will There be Season 5 For the Thriller Drama ‘Mr. Robot,’ or Has the Series got Cancelled after Season 4? Read More to Know More.