NETFLIX SERIES THE WITCHER : “THIS IS NOT OUR TRISS!!” FANS SHOWER ANGER FOR TWISTING THE CHARACTERS!!

Netflix created an uproar releasing the trailer for the novel and game-inspired ‘The Witcher.’ But the process is graduating by building up suspense. The official page is revealing which character is played by whom.

Henry Cavill, the most famous superman, plays the main character. But others are not far behind.

New characters are unveiled every day. One of them is the fans beloved Triss Marigold, Temerian Sorceress and potential LI of Geralt. The books describe her hair as chestnut but mention it as ginger in light of the fire.

The games portray her as a red-haired, green-eyed warrior. In addition to helping Geralt, she is also titled Merigold the Fearless in the games. Growing accustomed to the game’s presentation, fans are disconcerted with her look in the Netflix special.

Anna Schafer will play Triss Merigold. The actress is renown for The Whistleblower, Father Of Invention and Always Woodstock. Her hair does not coincide with the version of the game; nonetheless, since the series is based on the novel, it will be considered canon.

However, fans are upset and angry regarding the changes. As a result, they took to social media to slam the creators for not upholding the series prior characters’ presentation.

Fans attacked the comments section to show their disappointment and displeasure. They moaned the loss of the Triss they have not imagined, lamenting the Auburn haired look. 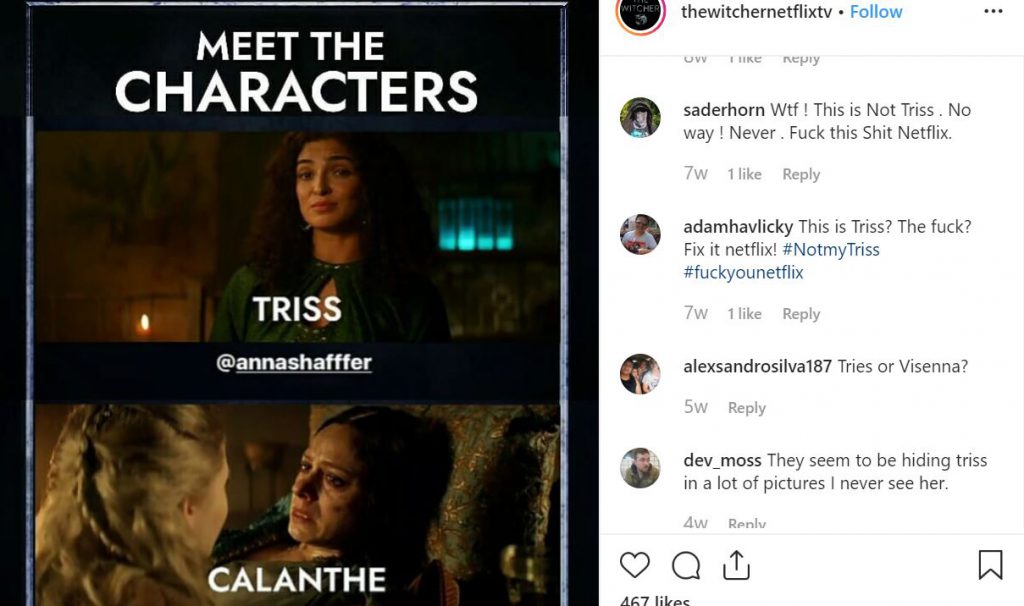 Some fans have tried to calm down their companions by pointing out that the Netflix series is following the book written by Andrzej Sapkowski. Additionally, the author has confirmed that he has no creative involvement with the Netflix series.

The show has revealed images of Geralt, Ciri, Yennefer, and Roach released, and, most recently, the official Netflix Witcher trailer showed Henry Cavill in action as the Witcher Geralt.

There have been other changes, but the creators have given logical reasoning behind them, but it remains to be seen if fans can keep their cool for long.