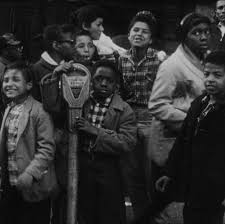 In today’s world of colorful pictures and films that are all about the fast pace of life and human lives almost running ahead of time, Manfred Kirchheimer beings us something so beautiful that it will bring back those nostalgic memories all at once.

Don’t Miss Out On The Beautiful Shots In The Movie, Free Time

Manfred Kirchheimer’s newest film field Free Time is a short movie that seems to break even the fast pace mundane routine and brings back the black and white magic all at once. The short movie beautifully brings together all that he shot with Walter Hess, a friend, from 1958 to 1960. Here’s the official trailer of the beautiful short film that will capture your attention at once.

He manages to show the city that many might have taken for granted for a long time now with all the whistle and bustle, here we can catch a glimpse of the slow life and children and adults doing things in the city that are a rare sight now.

Movie Buffs Will See A Whole New Look On The Streets Of New York City And More!

The audio that one can hear while watching the movie is constructed later on and was not included along with shots. These shots have a beautiful purity in them and cannot be ignored at any cost.

If you watch the movie, it is as if one has taken a time capsule and hopped on a time machine that took as back to New York City with a different setback and looks altogether. Some might have taken it way too for granted and it seems like time sure does run faster than one can imagine.

The 27-Year-Old Music Icon, Ariana Grande’s Album is Hitting Top Rankings on Billboard
Apple HomePod Mini is a Sound Packed into a Ball! It’s a Treat for Gadgets Enthusiasts – Review