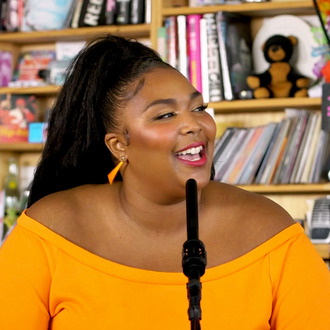 Rarely does it happens that a Tiny Desk Concert leaves people wanting for more? Only some artists can leave a long-lasting impression on the audiences’ minds. In this scenario, artist Lizzo showcased her immense talent as she hopped behind that now-famous “tiny ass desk” and kicked things off by belting “Cuz I Love You” with flawless perfection.

The 31-year-old singer, songwriter, and flutist also played “Truth Hurts” and “Juice.” With only a four-piece backing band, Lizzo took all of those NPR employees to church, the Holy Congregation of Lizzbians.

She usually has a backing track and badass backup dancers, but she kept it simple for the event. She hardly broke a sweat and barely batted an eyelash while belting, rapping, and playing the flute.

Her real name is Melissa Viviane Jefferson while Lizzo is her stage name. In 2019, she got mainstream success with the release of her third studio album, Cuz I Love You, The album debuted at number six on the Billboard 200 chart. Currently, she is nominated for the 2019 MTV Video Music Awards in the category for the “Best New Artist” and “Push Artist of the Year.”
Besides being a singer and rapper, Lizzo is also an actress.

WHAT ARE TINY DESK CONCERTS?

The Tiny Desk Concerts are a video series of live concerts hosted by NPR Music. It takes place in Washington, D.C.The first Tiny Desk Concert was held in 2008. After almost a decade, more than 800 concerts have been held. The collective viewership for these concerts stands at 2 billion on YouTube.

The series has drawn criticism for the lack of musical genres it includes. Zachary Crockett described them as focused on “hipster-infused indie rock.”There is an exclusion of genres like country and hip-hop. Performer Anderson Paak’s appearance on the series is the most popular video with 34 million views (as of 6 May 2019).

Has Poldark got cancelled or is set to return in another avatar later?
Hitler cries, ” Not Again!” – Jojo Rabbit Dark Comedy? What’s Special About it?
Comment