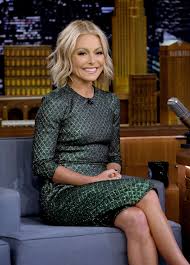 It seems like some people are concerned about popular host Kelly Ripa’s recent behavior on the show, Live with Kelly And Ryan. These people have been taking to social media to discuss how Kelly’s might be displaying some problematic behavior in recent times.

Some Fans Show Concern Over Kelly Ripa’s Behavior On Her Show, Live With Kelly And Ryan!

Some fans who follow the show regularly are claiming that something must be bothering Kelly as she is displaying odd behavior and constantly talking in a hyper-speech. Some even said that Ripa was extremely the show which was uncomfortable to watch! Another person added by saying that it was plain and odd and tense. Kelly has not yet addressed any of these severe claims and we wonder whether she is going to do that soon. Some fans didn’t stop here and even commented on Ripa’s weight saying that she is too skinny and should eat something. Kelly Ripa Is Defined As Hyper And Skinny On Social Media.

However, apart from these people, some jumped in Kelly’s support and praised her by saying that they just love seeing the two on-screen. One even said that if someone is not enjoying the show, then they should just not watch it in the first place. Some even praised Kelly’s outfit and her glasses which were so very stylish.

. @JENNIWOWW talks about the first season of #JerseyShore without @snooki pic.twitter.com/DzplSs2fU6

Kelly Ripa sure is quite popular amongst fans and we sure do love her on the show along with Ryan. Some even claimed that Kelly doesn’t really let Ryan talk too much and these fans could feel that Ryan was struggling with it. We wonder what the host has to say about all these ongoing claims made by fans.

Wolfgang Van Halen Is Remembering His Late Father In This Heartwarming New Music Video And It Is Too Beautiful And Poignantly Depicted!
Harry Styles Vogue Cover Photoshoot Faces Major Backlash From Candace Owens!