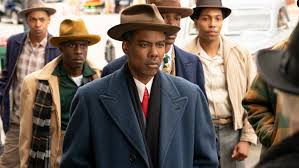 It seems like fans are all excited to see the much-awaited anthological drama series Fargo season 4. After a long wait and an interesting trailer, the fourth season is finally here with back to back episodes.

With a rather unconventional cast ensemble, the fourth season introduced actor Chris Rock Tomasso Ragno in the lead role as Loy Cannon and Donatello Fadda. With growing tensions between the two crime worlds, they eventually decide to trade sons to maintain peace. However, it is not that simple as it sounds and violence and intense action follows soon after.

Fans recently got to see the newest tenth episode titled Happy, as a few intense plot twists take place, creating the hype for the season finale coming soon after. Some of the characters have grotesquely lost lives with the blood-filled tenth episode. With the horrifying scene of Gaetano and his death and Oraetta behind the bars.

When Josto calls, you answer. The final episode of the Fourth Installment of #FargoFX is this Sunday at 10pm & next day on #FXonHulu. pic.twitter.com/AvCD16T2mZ

Moreover, after a blood-filled tenth episode, fans are eagerly waiting for the final showdown that will conclude the Chris Rock starrer story. If you haven’t already witnessed all the going action, here a little sneak peek into the latest episode.

Let Ethelrida tell you how this deal's gonna close. Watch the finale of #FargoFX's fourth installment this Sunday at 10pm. Next day on #FXonHulu. pic.twitter.com/268BQToJS8

If you haven’t  already started watching the latest season, tune in to FX and witness the crime saga with the season finale coming soon enough with back to back seasons. The final episode is soon going to arrive this Sunday on FX network, while the fate for the two leading crime syndicates will finally be decided. However, they might have a lay a heavy price for that with their own life!