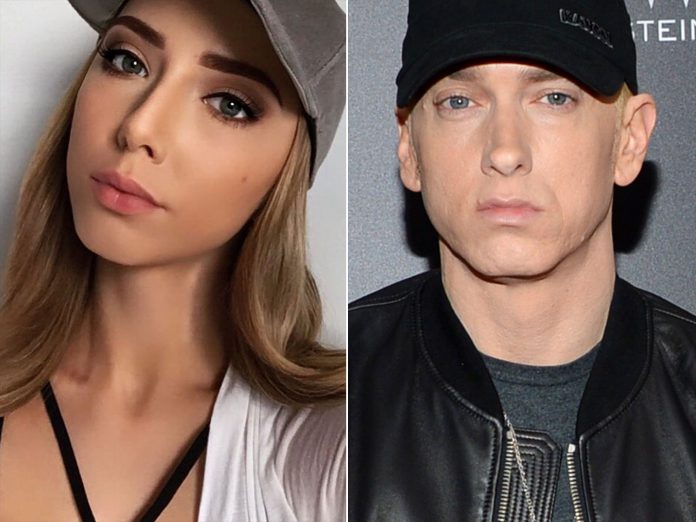 The daughter of the legendary rapper Eminem has posted some gorgeous pictures on Instagram. Is she trying to give any cryptic message through her post?

Eminem’s elder daughter Hailie Scott Mathers has a huge fan-base covering 1.7 million followers on Instagram. The twenty-three-year-old has emerged as an Instagram influencer over the time period. She shares her fitness tips on her Instagram along with her daily outfits.

Every selfie she uploads gathers great attention but Hailie’s recent one had fans talking about her even more than usual. She shared two stunning photos of herself which got huge attention among the fans.

In the snap, she had worn a green checked hoodie dress. Just skimming her toned rear, the diva paired the look with some high black heeled boots. It was rumored that the daughter of slim shady has got engaged as she captioned the pic with seven diamond ring emojis.

Moreover, Marshall Bruce Mathers III aka Eminem is also on an Abu Dhabi tour for his album “Kamikaze” which hit at the top billboards chart of 2019 in many countries. The rapper came up with the album more than a year now after he was criticized for his album named “Revival”.

Eminem has dissed several rappers such as “Migos”, “Lil pump” and many other mumble rappers. The rapper also dissed “Machine Gun Kelly” in two of his songs one name “Not Alike” responded by the MGK with “Rap Devil” and in response to it, Eminem released “Killshot” as a final reply to MGK.

MGK or Machine Gun Kelly was also reported of talking about Eminem’s daughter on twitter in which he said, “Ok so I just saw a picture of Eminem’s daughter… and I have to say, she is hot as fuck, in the most respectful way possible cuz Em is king”. Though the tweet didn’t make a good impression on Eminem’s daughter.

MGK also mentions Hailie in his diss-song “Rap Devil”. The “Killshot” got a huge response and it was told that MGK’s career is coming to an end after this.

Eminem also dissed Lord Jamar in his Dubai tour who made many comments regarding Eminem’s rap style and he didn’t like him, according to Lord Jamar Eminem is famous worldwide because he is a white guy and he is not the one who would he like to praise.

Previous article
A Fatal Accident at Southwest Kansas Killed Father and son so painfully that people were shocked!
Next article
NBA star LeBron James has a new Docuseries coming on Disney+; Know all the details here