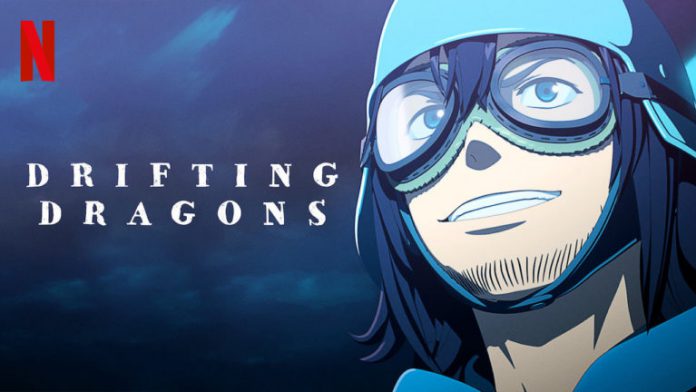 The Netflix’s anime series adaptation of Taku Kuwabara’s ‘Kūtei Doragonzu,’ ‘Drifting Dragons’ started quite well with an impressive debut around the platform to which now fans are estimating whether the anime series will be back for another season or not.

From Castlevania to Jojo’s Bizarre Adventure, there have been some incredible anime choices on to look forward on Netflix, yet the most recent addition to the desired list is Drifting Dragons, which itself has received quite mixed reviews from fans.

The first season of Drifting Dragons was quite enjoyable for some fans but was quite disappointing at the same time for others.

The story of the anime ‘Drifting Dragons’ mainly focuses on the team of hunters on the Quin Zaza airship and their chase for dragons. The experiences that the little group gets up to are silly, yet the danger that accompanies them with their profession remains obvious in all sorts.

Tadahiro Yoshihira, for Polygon Pictures, is the main director of the anime venture ‘Drifting Dragons.’ Earlier on, he has also worked on numerous other projects, including ‘Godzilla: The Planet Eater,’ ‘Knights of Sidonia,’ etc.

The story for the series was written by Makoto Uezu, who also oversaw the series scripts. Yoshikazu Iwanami serves as the sound director.

The series is based on the manga, known as ‘Kuutei Dragons in Japan. However, season 1 just investigated around 17 chapters of the source material.

On Netflix Japan, it was launched back in January, but around the globe, it was released on April 30th.

Fans are now speculating that even if season two is quite confirmed for Drifting Dragons, it won’t be able to be accessible outside of Japan until April 2021.

Whether there would be any Season 2 or not, it is yet to be confirmed by the OTT platform Netflix.

In any case, in light of the fact is that the series itself has followed the manga on very close terms, the fans can easily rather guess regarding where the season expansion will be heading to.

Previous article
Stranger Things: El (Eleven) Always Made Viewers Feel Whirpool of Emotions, We Cried & Laughed with Her. Here are 5 Instances Where El’s Pain Shattered our Hearts
Next article
Pirates of the Caribbean Series Left us Thrilled with the Action – Here is a List of Warriors that Left us Stunned with their Sword Skills