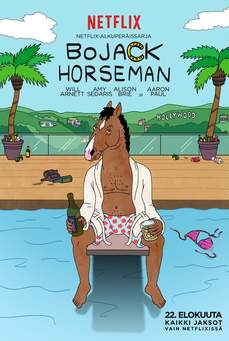 Bojack a humanoid horse, who is lost in self-loathing and booze decides to make a comeback for his career. Once considered to be the ’90s sitcom star, where he was the adoptive father in the show which unluckily got canceled. Now Bojack wants a comeback but the table has turned 360 degrees around since his time.

The show highlights sex, drug addiction, and alcohol, surely not for kids.

But even after such adult content, the show was able to fetch warmth from its viewers. It is one of the highly praised Netflix original series.

Surprisingly, the sixth season is the last season of the series. The final season is split in two where the first half is released in October 2019, while the second half will come in January 2020.

According to rumours Raphael Bob-Waksberg, the creator of the show was considered to be the one until it was disclosed that it was Netflix who decided to close the show.

In an interview with Vulture, Bob confirms that it was completely Netflix’s choice to mark the end of the series.

“Yeah, I thought we’d go a couple more years,” he says. “But you know, it’s a business. They’ve got to do what’s right for them, and six years is a very healthy run for a TV show. Frankly, I’m amazed we got this far. So I can’t complain. I think if we premiered on any other network, or even on Netflix on any other time than when we did, I don’t know if we would’ve gotten the second season.”

Bob also mentioned that long back he asked Netflix to give heads up if cancellation was looking.

He said that, ” So when they picked up season six, they said, ‘Hey, remember how you asked for that heads-up? We think this is you heads-up’. So I am very grateful that we got that notice”.

Comments of cast confirmed that it was Netflix who decided to pull the plug off of Bojack.

Aaron Paul who voices Todd Chavez on show Bojack horseman tweeted, “We had a wonderful time making Bojack couldn’t be more proud. Fell in love with these characters just like everyone else did but sadly Netflix thought it was time to close the curtains and so here we are. They gave us a home for 6 beautiful years. Nothing we could do about it.”

Not  only this a tweet from the official account of Bojack which quoted, “if you asked me 6 yrs ago how I thought id be remembered id have probably said that horse from horsin around but we are season 6 on Netflix the 2 part final season before I hit the dusty trail aka runyon don’t make plans Oct 25 or Jan 31 bc you’re watching me and feeling feels.”

if you asked me 6 yrs ago how i thought id be rmembered id have probably said that horse from horsin around but here we are season 6 on @netflix the 2 part final season before i hit the dusty trail aka runyon dont make plans oct 25 or jan31 bc youre watching me and feeling feels pic.twitter.com/PbVBLdfXP6

Previous article
Breast Implants wasn’t the only thing which Tiffany “New York” Pollard had to change, but her lifestyle, which made her sick??
Next article
Prime’s Action packed Jack Ryan Season 3 is already anticipated!! Is Season 2 going to be a big hit with the dangerous and adventures side of Ryan?