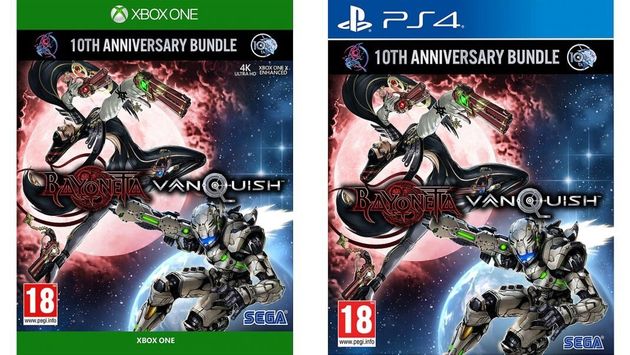 It is so hard to believe that these games were released almost ten years ago. Both of the games were pretty futuristic at that time, and certainly inspired the genres of action and hack-and-slash.

Now the 10-year anniversary edition brings the titles to the newer platforms of Xbox One and PS4, and we certainly hope that players can experience the same exhilaration from the past.

Bayonetta still has that amazing fantasy story filled with demons, witches, betrayal, and so much more. Every character in the game oozes out a personality that is so distinguished, the moment to moment type of gameplay is super engaging and enjoyable.

The combat system has been revamped with new styles of combos, new ways to shoot, and abilities that give an added advantage in combat to every character.

Vanquish is all about gun-fighting action to the core. The gunplay has been redone, and it certainly feels great to play with. The characters have got that tone of seriousness, and just perfectly gels on with the slick and vesting gameplay. There are issues with the camera view sometimes, and you can die all of a sudden due to these issues, but we must say that that game is as amazing as it was before. If you want giant lasers, body-piercing bullets, and amazing gunfights, Vanquish is just the game for you.

We were quite skeptical before the release, and we did not expect the games to be as good as the previous games. But we have to say, the smooth gameplay with the more consistent frame rates on the newer devices just makes the game so amazing, we can even go to the lengths of saying that the games were maybe even better than the original titles.

See also  'Rising of the Shield Hero' Season 2 latest updates: when is it coming? Who will come back? Check out major updates along with the cast and plot.

We have only spoken highly about the game so far, but something that we were expecting was the games to have some extensive art collections or extra costumes for the anniversary edition, but surprisingly there was none. The games look exactly like the original versions; we were expecting better lighting and smoother animation transitions in the newer version, at least.

The games are pretty good, and we were pretty satisfied to relieve the action that we experienced ten years ago. The game lacks a little bit of extra effort and love, in the form of not giving any extra content for their anniversary version and keep the game just like the original versions. Although that said, we feel that whoever it is, a newcomer playing the game for the first time or a veteran trying the games after ten years, we are pretty sure that both of them will love the games.