If you are also all worried about this Friday, the 13th, then here is some good news to help you. This Monday, Miley Cyrus and Ariana Grande surprised their fans with a teaser of their upcoming collaboration for Charlie’s Angels with Del Rey.

The name of the track is ‘Don’t Call Me Angel’. It will be the new theme song for the upcoming reboot of Charlie’s Angels. The Elizabeth Banks directed movie is going to have cast including Naomi Scott, Ella Balinksi and Kristen Stewart. The trailer of the movie was this year in late June.

Miley took to Twitter to announce the release date. She tweeted a teaser and captioned, “WE ARE COMING”. She tagged Ariana Grande, Del Rey and Charlie’s Angel’s official Twitter handles in the tweet.

This is Miley and Ariana’s second collaboration after their Crowded House’s rendition “Don’t Dream It’s Over”. The track was launched and performed in Ariana’s One Love Manchester benefit concert. 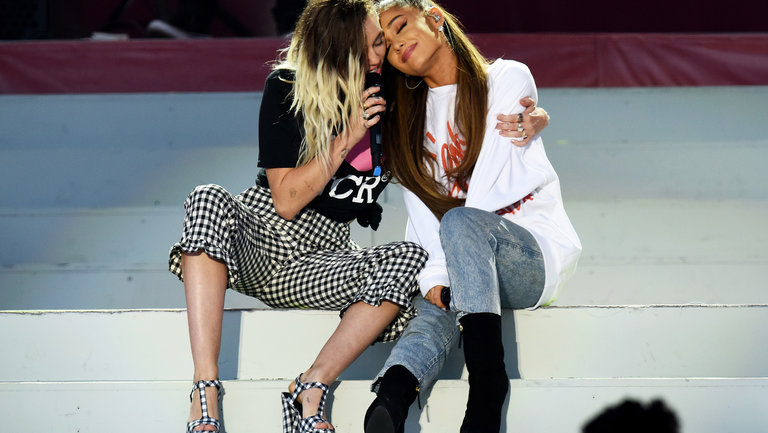 It’s going to be the first collaboration between Miley, Ariana and Del Rey. Recently Miley had released her break up anthem “Slide Away”, after splitting with husband Liam Hemsworth.

“I’m thrilled that three of my favorite artists ended up doing a song for the film. It’s really exciting. I can’t wait for people to see it, actually in full, in the film and to hear it when the single drops”, said director Elizabeth Banks to the press.

Banks also revealed that the upcoming track is inspired by the first Angels movie chart-topper. The upcoming “Charlie’s Angels” is all set to hit the theatres this year on the 15th of November.