A Gruesome Incident by Mother who Stabs Her Own 6 Year Old Child!! Chilling Updates!!

On Oct 21st in Henderson, Nevada, Police got a call from a six-year-old child crying for help.

Winston Lee Xavier Brandon,6, called up police screaming out that his mother, Claudia Nadia Rodriguez, 37, is trying to kill him. On arrival, police found William covered with blood. His mother, Rodriguez, was naked and lying on the ground.

When the police tried to take control of the situation and calm down Rodriguez and asked her about the situation, in return, looking agitated, she yelled, ‘You got to kill me.’ She caught hold of one of the police officer’s gun. To stop her, another cop fired on her multiple times.

After gun wound, she was immediately taken to the Sunrise Hospital and Medical Center in Winchester, where she was declared dead. The reason for her death was gunshot in the head.

Winston was taken to University Medical Center in Las Vegas, where the doctor found out that he was stabbed 25 times. The emergency surgery took a long time, but as per doctors, his chances of survival were more.

Police have finally released the 911 call and graphic footage of the horrific incident. As per the call, Rodriguez’s voice was heard where she was telling 911 operator and William, ‘They’re making us do it. We got to kill each other.’ In return, Williams was heard pleading three times, “Don’t hurt me.” 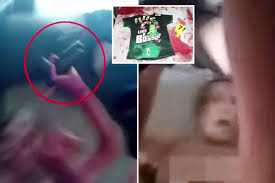 After this, the phone got disconnected, and the police were sent to the crime scene.

The newspaper reported that Winston’s father, Willie Brandon Jr, filed paperwork in February 2017 seeking primary custody of his son. As per him, she has earlier abused his two older children from a prior marriage.

While checking Rodriguez’s background history, it was found that she was habitual of domestic violence and was arrested four times from 2015 to 2017.

Previous article
Dad left with half a skull and sunken brain after being attacked with a Baseball Bat leaving him paralyzed!!
Next article
Insanity crossed!! California mother allows her husband to rape her 8-year-old daughter until she gets pregnant!!