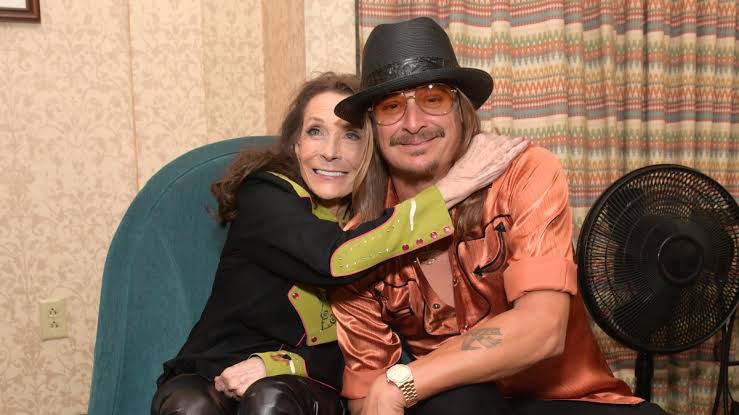 Loretta Lynn had quite the entertaining weekend and shared it on her official Instagram where she had a ‘wedding’ with Kid Rock that happened during a vow renewal ceremony between her son Earnest and his wife Crystal. “What a weekend! My Ernie and Crystal renewed their vows this weekend. It was beautiful and everything it should be. Marriage isn’t always pretty, but love holds you together and you push through the bad days to enjoy the good ones. I’m so proud of them and wish them years of happiness,” she captioned.

What a weekend! My Ernie & Crystal renewed their vows this weekend. It was beautiful and everything it should be. Marriage isn't always easy–heck it's not even always pretty, but love holds you together and you push through the bad days to enjoy the good ones. I'm so proud of them and wish them years of happiness. Things got crazy then–my boy @kidrock was there and we've always teased about getting ourselves married. Well, the preacher was already there so we had some fun with it. Sorry girls, he's taken now! #gottahavesomefun #88andfeelinggreat #laugh #tabloidfodder #cougar @lorettalynnranchofficial

In most of these photos, we can see Kid Rock and of him down on one knee, with his hands in Lynn’s. In one pic, Lynn was even wearing a bridal veil and Kid Rock was holding something in his hand. Lynn wrote,”My boy @kidrock was there and we’ve always teased about getting ourselves married. Well, the preacher was already there so we had some fun with it. Sorry girls, he’s taken now.”

Well, it didn’t last long, y’all but it sure was fun! I guess I better get on here and let y’all know that it was just a joke— @kidrock and I didn’t get married over the weekend, but we had a blast. #rockon #relaxoutthere #easymediafolks #calmdown #funtimes #whatwillshedonext #its2020soyouneverknow #iputhispictureaway

Her fans thoroughly enjoyed the photos and said this was “what they needed in 2020” and “the best thing they’ve seen all day.” They especially liked how shy Kid Rock looked in most of the pictures.

Lynn’s granddaughter Tayla Lynn later explained that her dad and stepmom wanted to do something special for Lynn and Kid Rock who had been good friends for years. She said that they had always joked around about getting married. So this was a surprise plan they came up with and both Lynn and Kid Rock were taken completely off guard.

I’ve thought a lot about @garthbrooks stepping down from being considered for CMA Entertainer of the Year. That’s classic, humble Garth but I think he’s wrong on this one! He’s won it 7 times because he earned it! In my book, he’s earned it 20 times over and deserves to win it anytime they count the votes up and he’s on top. He’s worked his heart out and you can mark it down that I’m his biggest fan. I hope CMA ignores his request! Love you, honey. #hesgarthbrooks #entertaineroftheyear #8timesisokbyme #itsnotaparticipationaward #notsorry #callemhowiseeem #hardtruth #88isgreat #gettingthehangofhashtags

Keep in mind however, that this was only a joke.

Gilmore Girls a year in the life is back with the popular mother daughter duo to entertain the fans! Check out all updates here.
What will happen to the Black Panther franchise now that Chadwick Boseman is no more? Who will be replacing him?