Embrace Yourself! ‘Saga’ has Announced the Return of the Classic Comic Series 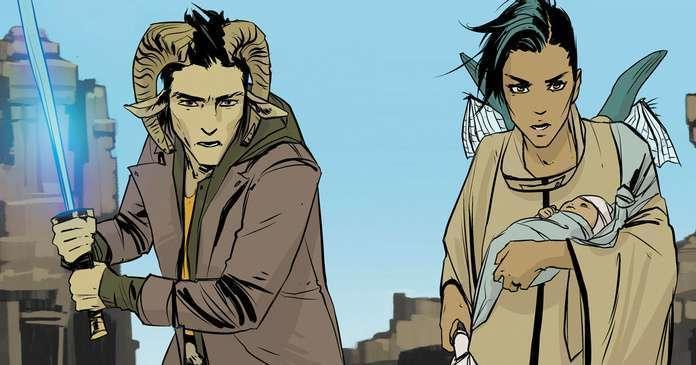 The news has been announced by Image Comics that Saga by Brian K. Vaughan and Fiona Staples. The comic is one of the best selling of all the time and soon will be coming with the second series of the book. For now, the issue date is announced as January 26. Meanwhile, it will be a double-length ‘Saga’ it will be 55th and in the series and it will have 44 pages in total.

The little back story of the comic

The story follows a girl who is named Hazel and her family, which is not the most perfect family. However, the girl is brave and with her family, they are facing various adventures. In the second season, there will be some new characters and according to creators, it will be the epic chapter yet.

The reason why this will be special is that Saga is collaborating with Fiona Staples. It was also said by the creators of the comic that other than her own family Fiona Staples is the second most important thing in her life. She also thanked the readers and the retailers for their support of her comics. And also for being so patient for the second series. The writer of the series Vaughan also said that their upcoming 54 issues will also be very shocking.

Eric Stephenson who is the chief creative officer and publisher of the book said, Saga is getting launched at the company’s 20th Anniversary. Even if you wish to, you can buy various Saga books online. They are available at comic shops, and on Kindle as well. For now, the creators have released the front page of the comic.

Also read: NETFLIX PICKED UP BESTSELLING NOVEL “THE NIGHT AGENT” FOR AN ADAPTATION!

Previous article
Outlander : Trailer for Season 6 Featuring Starz is Out! Don’t Miss it
Next article
KOCCA Music Announced the Line-up of Artists for the First Virtual Concert