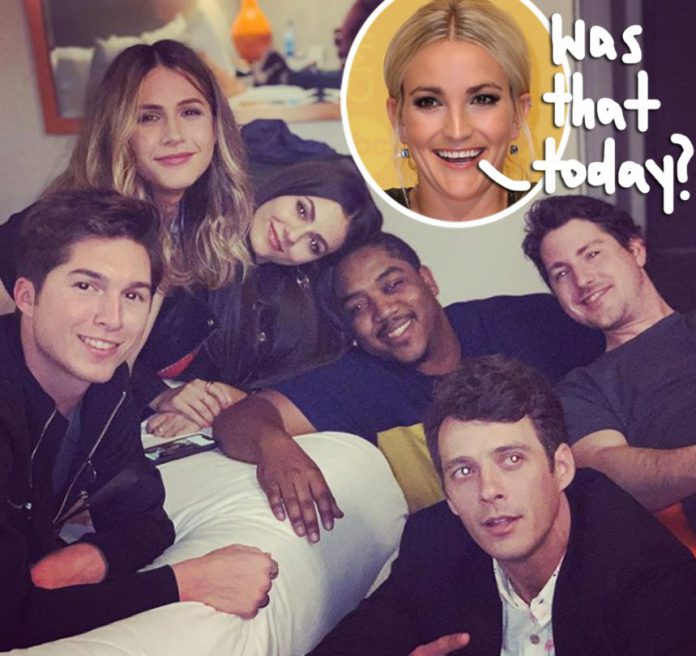 Zoey 101 was a hit nickelodeon series which focused on the life of a teenager, Zoey Brooks. She had a brother Dustin and friends, and they went to the Pacific Coast Academy, their school in South California. Played by Jamie Lynn in all the four seasons, Zoey 101 was a fantastic show that went off the air 11 years ago. After such a long period of 11 years, the cast of the show reunited on July 29, 2019. However, one of the former cast members did not attend the reunion on Monday. The missing member was none other than the lead of the show itself, that is Jamie Lynn.

The former cast members who attended the reunion like Sean Flynn, Victoria Justice, Matthew Underwood, Paul Butcher, and Christopher Massey posted pictures on Instagram. They even gave a shoutout to Jamie telling her that they miss her. They also added that they wished Jamie could be there at the reunion with them.

All the attendees said in the video they posted that they want to see Jamie soon and ended up the video singing the theme song of Zoey 101 ‘follow me’ which was originally sung by Jamie Lynn Spears herself.

The funny part of all was that Jamie did not just miss the reunion, but even missed their FaceTime call. Zoey (Jamie) later claimed on her social media post that she is lame and fell asleep and due to that could not attend the reunion.

See also  Watch a toddler's hilarious reaction to watching the Hulk for the first time!!! Know what was actor Mark Ruffalo's response to the video

The show was on the air from 2005 to 2008 after which it came to an end. Jamie claimed on a social media post that the show ended because her contract finished and not because she was pregnant, which was a supposition.

There are rumours that the show might come up with its fifth season soon and it would be astonishing and amazing for fans if this rumour comes out to be true.

Back to the port of Miami: Rick Ross comes up with the sequel of his hit album ‘Port of Miami’.

'The Hustler', William Leonard Roberts II, professionally known as Rick Ross, is an American rapper and a record executive. Rick Ross has finally launched the much-anticipated sequel of his 2006 debut album Port of Miami. The 2006 collection debuted...
Top Trending

No more public account: Rosanna Arquette slammed for saying she ‘feels so much shame’ over being white and privileged.

Winner of the BAFTA Award for Best Actress in a Supporting Role for the 1985 film Desperately Seeking Susan, Rosanna Lisa Arquette is a film director, a producer, and an American actress. For her performance in the 1982 TV...
Top Trending

‘The Wrecking Ball’ star sings ‘The Last Song’ for her husband: Miley Cyrus and Liam Hemsworth getting separated.

Miley Ray Hemsworth is an actress, a songwriter, and hit singer. The Hannah Montana lead married her lover Liam Hemsworth in December last year. However, the couple is separating after less than a year of marriage.The couple exchanged love...
EntertainmentTop TrendingWorldCelebrityShow & Movie SeriesHollywoodTv Show