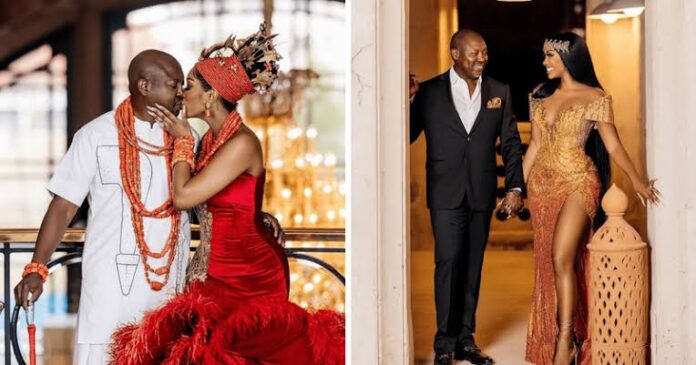 Porsha Williams and Simon Guobadia are married on Friday. The 41-year-old Real Housewives of Atlanta alum and the Nigerian-born businessman 57 wed in a Nigerian traditional native law and custom ceremony at the Four Seasons Hotel Atlanta in front of 250 guests.

The couple tied the knot again in the American ceremony on Saturday. Williams told that she was ridiculously excited and was just so ready and nervous.

Guobadia meanwhile said that he is a little nervous but not for the reason one may think. He said that his nervousness comes from the family members and friends who he hasn’t seen In a long while coming to Atlanta.

Porsha Williams said that she is anxious about their wedding in the seven wardrobe changes that she will be making for two days, and added that she just couldn’t resist any of the dresses, a true fashion extravaganza.
On the day of the Nigerian wedding, Porsha Williams had three outfit changes.

For Porsha Williams and Simon Guobadia’s wedding, Williams wore a red gown by designer Lakimmy customary for an Edo bride. She also wore an okuku headpiece.
Later she changed into two other gowns that were designed by Tabik, one in royal blue and the other in gold.

Guests were also asked to follow suit by wearing traditional or formal Nigerian attire in the colors of the day purple or teal.
Ever since they announced their engagement, Williams said that she knew that she wanted to honor Guobadia’s culture at their wedding.
Guobadia said that their journey has been phenomenal and he couldn’t have asked for a better future wife.

Previous article
Jennifer Lopez Shows up with her Album ‘This Is Me… Now’ For the First time in 8 Years
Next article
BMF: STARZ released Official Date & Trailer for Season 2