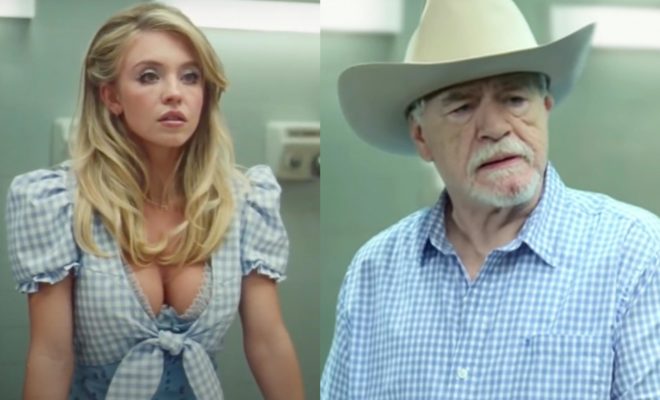 The Succession‘s star Brian Cox interpreted the underlying scene from the second season of Euphoria on the Jimmy Kimmel Show. He offered to play the role of Cassie, originally played by Sydney Sweeney.

The Scottish actor, Brian Cox, undoubtedly played the role of a teenage girl like a master. There, he was wearing a blue coloured shirt with a cowboy hat to perform the scene.

Brian steps up to play the role of a high school girl, who is in a girl’s restroom along with other girls revealing her romantic feeling for Nate. Other girls in the room includes Zendaya as Rue, Barbie Ferreira as Kat, Alexa Demie as Maddy and Maude Apatow as Lexi.

Brian was digitally inserted into the role and then he narrates the dialogue. He is playing the role of Cassie, proclaiming her strong feeling for Nate in front of other girls. She explains how much she loves him and he loves her back. Brian plays that scene extremely well.

Euphoria is based on a story of girls from high-school who have experienced trauma, drugs, family, friendship, intimacy and love. Sam Levinson is the creator of the series and it has been a popular teen drama of HBO. It is out with two seasons and it is already picked up for the third season.

Brian Cox was playing the character of Logan in the series Succession by Jesse Armstrong. He was an acerbic Roy family patriarch. Further, he is against his kids to take the control of global media and entertainment conglomerate, Wayster Royco. He even won his first Emmy in 2020 for playing the leading actor in the drama series. Succession and Euphoria, both are extremely popular series of HBO.

Also read: STEPHANIE BEATRIZ RECORDED ENCANTO’S “WAITING ON A MIRACLE” DURING HER LABOR