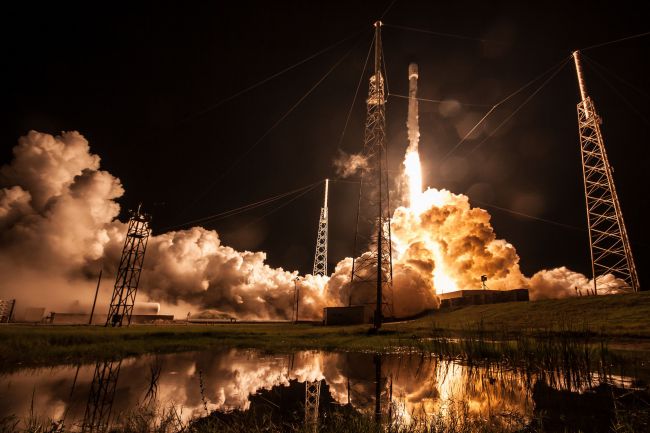 SpaceX, the private space transportation services company, has delayed its scheduled weekend launch of an Israeli communications satellite AMOS-17. AMOS-17 is set to provide telecommunications access to the countries of the Middle East, Africa, and Europe.

WHAT HAS HAPPENED with AMOS-17?

SpaceX was initially supposed to launch AMOS-17 on July 24th, but poor weather forced a delay. The backup launch window also got delayed for the same reason. The next possible launch window was this past Saturday, August 3rd, but that, too, was canceled due to issues that arose during a static fire test of the Falcon 9’s engines. The launch was pushed back, with the earliest possible launch coming on Monday, August 5th.

Static fire test of Falcon 9 complete—team is now working toward August 6 for launch of AMOS-17 from Pad 40 in Florida, pending Range availability

Usually, the standard prelaunch test for SpaceX missions is a static fire. During this process, the company ignites a Falcon 9 rocket’s first stage on the launchpad for a short period. This is done to make sure the booster is ready for the actual flight.

The Falcon 9 first stage booster has already flown twice before, as per SpaceX. The first launch was done in July 2018, and again in November in the same year. However, this time, the engineers suspected a valve, and are, therefore, replacing it. This is the company’s workhorse Falcon 9 launch vehicle. Till Saturday, SpaceX did not conduct the second Falcon 9 static fire test.

After the loss of Amos-6, this will be the first time Falcon 9 will launch a Spacecom satellite. Amos 6 got destroyed on Sept. 1, 2016, during that mission’s static fire test. Earlier, SpaceX performed test firings with payload fairing attached to the Falcon 9, which is no longer practiced.

Unfortunately, the mission was not able to make its August 5th launch window, and SpaceX is now targeting a launch on Tuesday, August 6th instead. The time has not been set yet.

The AMOS-17 will be launched to replace the AMOS-5 satellite, which was launched in 2011. The spacecraft is supposed to enter a geosynchronous orbit, and due to they have to send the satellite into the correct orbit, SpaceX will not attempt a soft landing of the first stage of the Falcon 9.

Falcon 9 had a successful year with seven flights and seven successful landings to its name. Elon Musk’s spaceflight company regularly provides a Livestream of its launch at the SpaceX website. If the launch is done, we will get the updates on the SpaceX website for sure.

For now, there is still no official confirmation yet. Hopefully, the SpaceX repairs are done, and the weather supports the launch.

Article 35A and Article 370 abolished. What does the Indian Government has in its store for Jammu & Kashmir?
President Donald Trump on the Texas and Ohio shootings: Asks to pair immigration bill and background check of gun users!
Comment