Mars and Uranus will align in a rare “planetary conjunction”. Here’s how to view!! 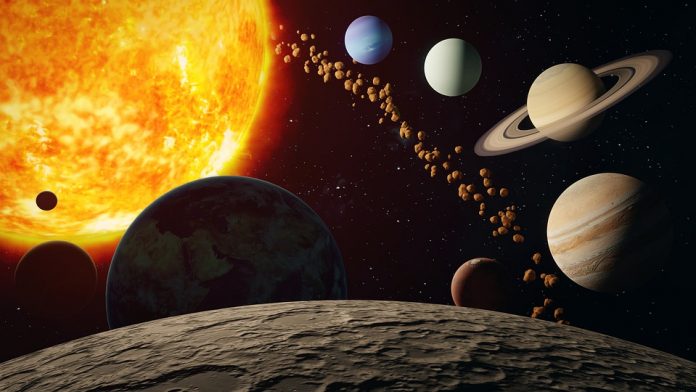 The chance to view the Red Planet and the Green Planet in the same binocular field of vision is quite uncommon.

This weekend, Mars and Uranus will enter a rare planetary conjunction in the constellation of Aries, appearing just two widths of a full moon apart.

It’s a rare chance to not only catch a glimpse of a brightening Mars but also dull Uranus, which is generally difficult to spot in the night sky.

Both planets can be seen in the same field of view when using any pair of binoculars.

There won’t be much proximity between the fourth and seventh planets from the sun. Despite being just over 1 degree apart in the early hours of Monday, August 1, they will really be roughly 1.6 billion miles (2.6 billion kilometres) apart.

How to view the Mars-Uranus conjunction and when

Any night this weekend and through the first part of next week will provide breathtaking views of Mars and Uranus in conjunction, however the exact moment of closest conjunction will vary depending on your specific location. As seen from the Northern Hemisphere, they will rise simultaneously in the east at midnight local time and remain visible high in the southeast until just before sunrise.

The absolute closest conjunctions will be visible early on Monday, August 1 and Tuesday, so look around 1:00 a.m. local time where you are (Aug. 2).

The Pleiades, the brightest open star cluster in the night sky, should be seen close to the two planets as well.

How to view the Mars-Uranus alignment

Although it is theoretically feasible for certain astronomers to view Uranus with the unaided eye under completely dark skies, using binoculars or a small telescope is a much better chance. Both planets will be visible in the same area of vision with binoculars. While Uranus will have a blue-green colour, Mars will appear reddish.

Another choice is to witness a live webcast of the Mars-Uranus conjunction via the Virtual Telescope Project, which will begin streaming at 9 p.m. EDT on August 1 through a telescope in Rome, Italy (01:00 UTC on Aug. 2).

Why Uranus is less light than Mars

During their conjunction, the two planets’ brightnesses won’t be identical. As it moves closer to Earth, Mars is progressively becoming brighter in the night sky, and this weekend it will shine at a brightness of 0.2, or almost the same as a bright star. It will be 208 million kilometres (130 million miles) away from Earth. That is a lot closer than the much further ice-giant Uranus, which will be visible at a magnitude of only 5.8 and be 2 billion miles (3.2 billion km) away. That is right at the edge of what the human eye can see.

Mars is now becoming more visible as it approaches its opposition, which occurs when Earth is positioned between a planet and the sun. This makes the planet appear brightest and makes it visible all night. In our night sky, all of the outer planets from Earth are in opposition. Mars transits into opposition every 26 months because it takes 687 Earth days—roughly two Earth years—to orbit the sun. On December 8th, Mars will achieve a brightness magnitude of -1.9, which is about equal to Sirius, the brightest star in the night sky.

One opposition occurs per Earth year for the much slower Uranus, whose orbit takes 84 Earth years to complete. On November 9, Uranus will be in opposition, but due to its great distance from Earth, even then it will only shine with a magnitude of 5.7.

We Earthlings never see Uranus get large or bright, so this weekend’s conjunction with Mars is a unique chance to see the seventh planet for yourself.