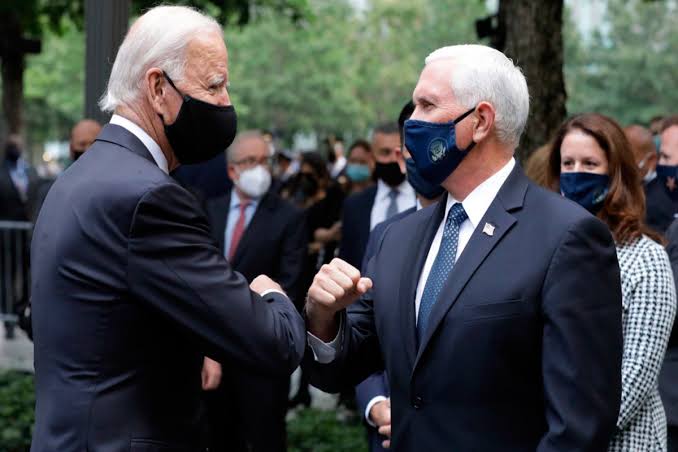 It has been 19 years since the tragic event

9/11 is an event that not just America, but the whole world sourly remembers as it was one of the worst terror attacks to happen, where Al-Qaeda sent planes to crash into the world trade center and broke the twin towers.

Get in! We’re going to go vote. iwillvote.com

This single event killed almost 3000 people and more than 25,000 people got injured. On the 19th anniversary of this tragic event, there was a gathering to pay respects to those who lost their lives, and former and current Vice-President Joe Biden and Mike Pence came at the same time and greeted each other showing no bitterness towards each other.

It was unique to see the two on such friendly terms and they even bumped their elbows with each other, which has replaced the handshake during this coronavirus period. What surprised everyone was that usually when opposing candidates meet before elections, a verbal argument is common. Their wives, Dr. Jill Biden and Second Lady Karen Pence also greeted each other in similar fashion.

Blessed Are The Peacemakers

Moreover, Joe Biden had made it a point to not make any political statements on a day that is intended for mourning. His party is also not playing anything dirty and held off on advertising and campaigning for the whole day. Biden said, “I’m not gonna make any news today. I’m not gonna talk about anything other than 9/11. We took all out advertising down, it’s a solemn day, and that’s how we’re going to keep it, ok?”

A military flyover of Manhattan was planned, but was cancelled after critics called it, “Completely tasteless.”

Meanwhile, president Donald Trump was not present at the 9/11 memorial but paid his respects in Shanksville at the crash site of United Airlines Flight 93.

What does the deal between Israel and Bahrain mean? What are the benefits?
Donald Trump makes a nonsensical comment about his rival Joe Biden consuming drugs with no evidence!