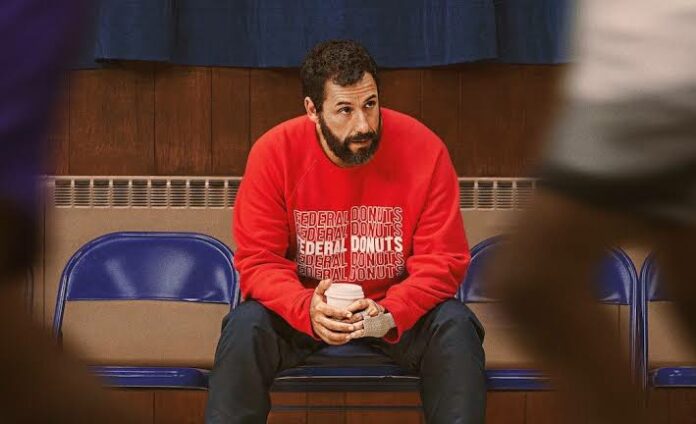 Adam Sandler has once again partnered up with Netflix after Uncut Gems. This time, he has starred in Hustle, a sports drama. It is rare to see the actor drop his signature humor and star in a movie that shows more serious issues, but we know that he can nail such roles as well. Uncut Gems was one such project. And now, so has Hustle. The movie tells an inspirational story with characters you can get attached to.

Hustle no doubt follows the sports drama formula, but it hasn’t failed to inspire. Director Jeremiah Zagar and cinematographer Zak Mulligan presents a unique visual poetry, and presents two men, down in their luck, trying to get their redemption. Sandler plays Stanley Sugarman, a basketball scout who loves the sport with all his heart. However, he has not once turned it into a profitable career. We follow him as he roams Philadelphia, after being newly hired as an assistant coach by Philadelphia 76ers owner Rex Merrick (Robert Duvall). He is now happy to be with his wife Teresa (Queen Latifah) and their teen daughter Alex (Jordan Hull). However, it was short-lived as Rex suddenly passes away.

The business is now managed by his aggressive son Vince (Ben Foster). Vince sends him out again as a scout to find someone who can secure the 76ers the championship. His scouting takes him all the way to Spain where he meets Bo (NBA player Juancho Hernangómez), a construction worker. Seeing his talent, Stanley begs him to come try out.

This is clearly a standout performance by Sandler, who gives his best to the role. His natural love for basketball has also been helpful. Latifah plays the relaxed, no-nonsense and supportive wife, and even Juancho showed how good of an actor he is. Hustle is a sweet and wonderful story, and you can expect some good cameos.