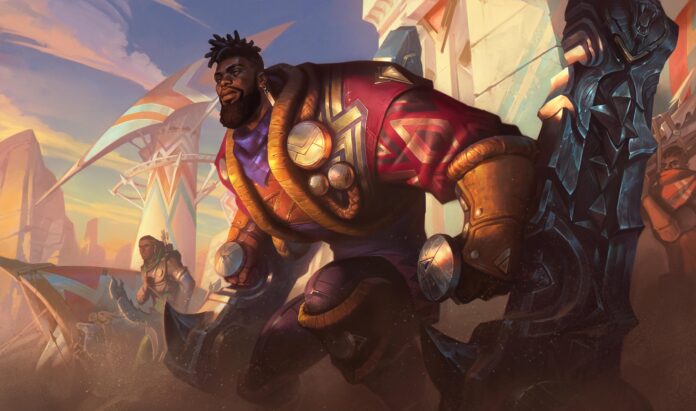 The last quarter of 2022 is incredibly eventful for the community as Worlds has begun, new champion K’Sante is making his way to League, and Season 12 is nearing its end. So what better way to mark the end of a Season than by revealing new champions, introducing new skin lines, and giving out ranked rewards?

Are you interested in acquiring the skins you always wanted but prefer to spend less cash on? Then, why not get premium LoL Accounts with everything your heart desires? We feature a plethora of cheap LoL Accounts for sale specifically made for you!

K’Sante is heavily inspired by the African culture, portrayed as a dweller of the Shuriman city Nazumah. The city is the only one in Shurima not keen on subjecting to and worshiping Azir. Therefore, K’Sante is Nazumah’s hero, leading his warriors to battle and slaying dangerous beasts, with which the origin of his name is associated.

K’Sante’s weapons are called Ntofos, which resemble real-world tonfas. Ntofos are made from regenerating properties of one of the slain beasts that allow K’Sante to break their exteriors to reveal blades. Later on, the weapons restore to their original form. Further, we will get into detail and break down K’Sante’s abilities. Finally, note that his Ultimate, All Out, offers a special effect for all four basic skills.

Dauntless Instinct allows K’Sante to mark enemies with his abilities that, when hit, deal extra damage based on the enemy’s max HP on top of regular damage.

During All Out, the passive deals regular damage paired with max health true damage.

Ntofo Strikes allows K’Sante to hit the ground with his Ntofos to deal AoE damage and slow the target, granting him a stack. After two Q stacks, K’Sante can emit a shockwave that Knocks targets up and pulls them towards K’Sante.

During All Out, Q has a shorter cooldown and does not slow targets.

Path Maker allows K’Sante to enter a defensive stance, during which he is unstoppable and receives reduced damage. Recasting this ability propels K’Sante forward, dealing damage, knocking back, and stunning affected targets based on the charge duration.

Entering All Out refreshes the ability, increasing the damage reduction buff and dealing extra damage based on the charge time. Recasting W during All Out doubles the charge duration and speed of the dash.

Footwork allows K’Sante to dash, receiving a shield. If K’Sante dashes to an ally, the range increases, and the partner gets a shield. K’Sante can use other spells during Footwork.

During All Out, E receives a dash speed buff and increased range allowing him to dash over terrain.

All Out makes K’Sante break his Ntofos, revealing blades underneath, dealing damage, and knocking enemies back. If the target is adjacent to the terrain, K’Sante will push the target over the terrain and stun them, during which he follows them and enters All Out mode.

Entering All Out buffs K’Sante’s damage, grants omnivamp, and augments his abilities. Moreover, he loses a percentage of max HP, bonus magic resistance, and armor.

Season 12 will officially conclude on November 14th for all servers before midnight for each time zone. During the following four weeks, Riot will issue ranked rewards to those hitting Gold or higher in Solo/Duo or Flex. These players will receive Victorious Sejuani skin, and every next rank will receive its unique chromas. Additionally, all players in Gold or higher will receive Sejuani Eternals Series 1, a Ranked profile banner, and a profile icon.