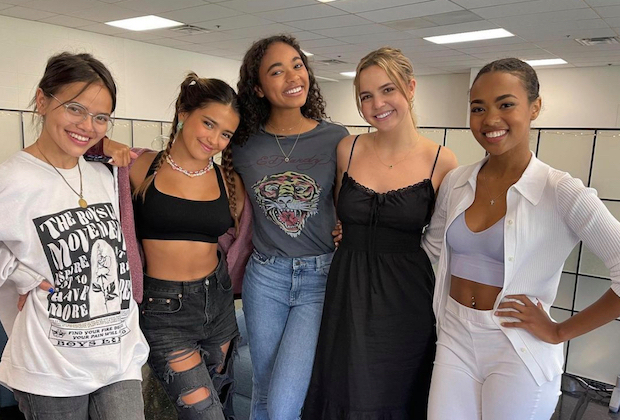 Prior to attending the premiere of their new TV show, “Pretty Little Liars: Original Sin,” Lucy Hale was interviewed by Extra’s Katie Krause and revealed that she had not visited Warner Brothers Studios since filming ended on her last project five years ago. She described this event as being a ‘full circle moment’ in life because it brings back so many memories for both herself personally while also witnessing how much has changed around town since PLL finished its run!

There’s a chance that Lucy Hale could appear in the new Netflix series Pretty Little Liars: Original Sin. The actress who played Aria Montgomery on original PLL told me she was excited to be back at Warner Brothers Studios after five years since filming ended!

The original series, which revolved around Aria and her three best friends (Spencer Hastings ,Hanna Marin & Emily Fields) being blackmailed by an anonymous identity known simply “A” was a huge hit. It ran from June 8th 2010-June 27 2017 on Freeform for 7 seasons with over 100 episodes!

“It’s really freakin’ cool… They get into the meat of what makes a good slasher film, and it has that same sense of nostalgia with all these great characters. And I just loved every minute! There was enough newness to keep me engaged without feeling like they were rehashing stuff or anything.”

Roberto Aguirre-Sacasa and Lindsay Calhoon created the Original Sin, the fourth instalment of the Pretty Little Liars television franchise based on novels by Sara Shepard, is here. The show, which will stream on HBO Max, follows a group of young girls who start receiving messages from the enigmatic “A” and is set in the same timeline as the previous series.

Hale isn’t a part of the cast of the new television series, which also stars Chandler Kinney, Maia Reficco, Bailee Madison, Zaria, and Malia Pyles. She likes that the two programmes are distinct, but she hasn’t fully ruled out making another appearance.

When asked if she would be open to playing Aria again, she told Extra that there is “something very amazing about how different they are and… there is a familiar aspect, but I think keeping the tales extremely separate, it is fantastic, too.” “I don’t know, who knows, listen…? Would I now be a mother? Never say never from me We’ll see, then.