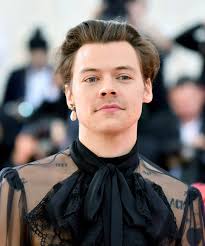 The whole Harry Styles Vogue photoshoot has unleashed a big controversy as Candace Owens has to backlash the shoot and penned down a tweet demanding to bring back manly men.

Several Celebs Are Jumping In And Supporting Harry Styles For His Newest Photoshoot!

After Co-star Olivia Wilde defended Harry Styles and called out Owens and stated that she is pathetic. She even praised Harry Styles’ for his confidence. Now, several other celebs have also jumped in Harry Styles’ support and pointed out how problematic Candace Owens’ statement was. Here’s what Jameela Jamie has to say about the whole cover-shoot.

Harry Styles is plenty manly, because manly is whatever you want it to be, not what some insecure, toxic, woman-hating, homophobic dickheads decided it was hundreds of years ago. He’s 104% perfect. 🤘🏽

Jameela Jamil, who has often raised her voice on body positivity issues and is an activist herself, praised Harry Styles and said that he is plenty manly, because manly is whatever you want it to be. Apart from Jameela Jamil, even Zach Braff supported the photoshoot and the idea behind it. He said that all their lives, they are told that men need to be manly. Life is short, so we would be whatever we want. Here’s what Zack Braff tweeted in response to the whole controversy.

Our whole lives boys and men are told we need to be manly. Life is short. Be whatever the fuck you want to be. pic.twitter.com/oY6ji3tpaI

Several celebs and fans are supporting the idea behind the photoshoot. However, Candace Owens is staying firm to her words and she even made another tweet and images of some iconic men in dresses while stating that she is impervious to woke culture.

I’m impervious to woke culture. Showing me 50 examples of something won’t make it any less stupid.#BringBackManlyMen https://t.co/7NKrrGiZSf

Owens went to say that these examples are not enough to justify the whole issue. This tweets have unleashed a whole new debate with several known ones jumping in the singer’s support as he created history with this one of a kind cover- shoot.

Anime Series Attack On Titan Is Coming To A Final End With Season 4, This December!
A Trip Down the Memory Lane with Some of the All-time Popular Gaming Consoles