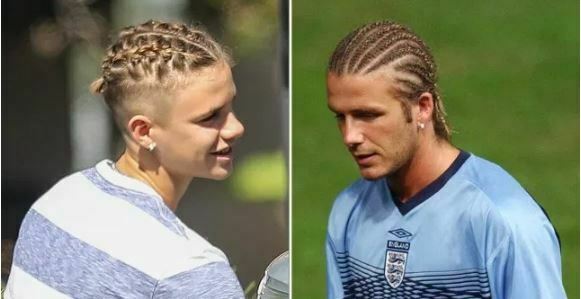 David Joseph Beckham is currently the president of Inter Miami CF. The 17-year-old boy was seen shopping in Los Angeles in a look that his dad put on during 2003. Romeo’s blonde hair looked alike like his father’s iconic braided look.

The boy went shopping with his mother, Victoria Beckham, and brother, Cruz Beckham. The hunt was for jewels for his mom, Victoria. It’s been 16 long years since David showed off his braided hair while going towards the England football training camp. During that time, Romeo was just one year old.

Well! Now this recreated look by junior Beckham is grabbing all the buzz and attention.

The shopping time was a fun outing for the fam. Both the sons escorted their mother to the jewelry shop. The 45-year-old fashion designer was wearing black workout gear with a black baseball cap to the outfit. She paired the outfit with a neon trainer shoes. She styled her hair in an updo style and wore a radiant make-up.

This new look of Romeo Beckham paid homage to daddy David can be because of Katie Price’s new do last week. The 17-year-old son liked just a copy of dad from his 2003 look. He paired the new hairstyle with some chunky jewels.

Romeo wore a silver chain and a diamond earring. His outfit was pretty casual. He wore a t-shirt with light blue and white strips. For the bottom, he chose a khaki trouser. His brother, Cruz who has turned 14 this year and wore a red color striped t-shirt.

The teenage seemed very confident with his new look as he carried his braided hairstyle. He looked very similar to his father when David was young.

Previous article
Comedian Pete Davidson spotted with model Kaia Gerber!!! Is something brewing between both of them?
Next article
Tom Cruise and Suri Reuniting After Six Years; Read Further To Know What’s Holding Him Back To Meet His Own Daughter