See how Arnold Schwarzenegger and Sylvester Stallone are trolling each other again? 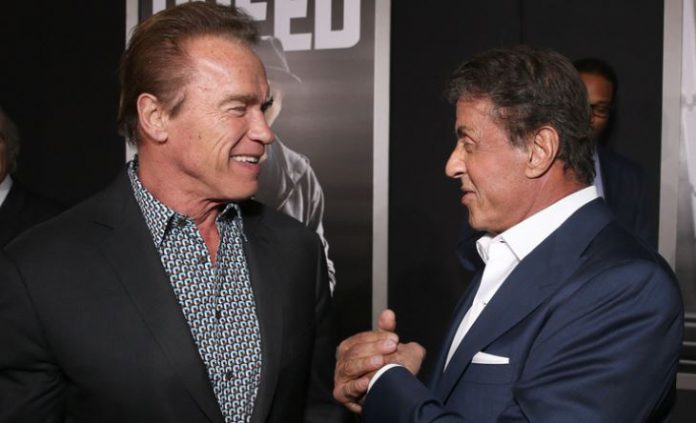 The two have been noticed to affectionately troll each other on social media. We have noticed them for quite some time. Recently, Arnold Schwarzenegger trolled Stallone again. The two incredible stars met at the Jimmy Kimmel Live show.

There, Arnold Schwarzenegger was seen to pull the legs of Sylvester Stallone. Arnold teased Sylvester by reminding him how he was tricked by Stallone. Sylvester fooled Arnold to act in a 1992’s movie named ‘Stop! Or My Mom Will Shoot’.

The star then posted a video on Twitter, showing how he was persuaded Arnold a role in the movie. Though to be precise, this movie is one of the classic movies of the 20th century.

He responded to the troll by initially addressing Slyvester as a big muscular friend.  He said that last night at Jimmy Kennel’s show, you kind of made fun of me. Stallone told everyone about how he got persuaded for doing the role. He described the movie as the worst film ever in which he became a part of.

However, he added that it does not bother him in any way. He wrote it is neither it is a terrible scar nor it’s there in his memories. But he continued to this by saying that maybe a little.

The actor also trolled him by saying that ‘I write’. But unfortunately, Stallone does not. So, he will write a sequel to the movie he did. He mentioned the name as ‘Stop or Your Grandmother Will Beat Your Ass’ which he would direct himself.

The mocking went as a joke. This way, both have been trolling each other for the past few months. Sylvester Stallone posted a funny photoshopped picture of Arnold captioning it as he looks better than him.

The series of trolls continued in September too. This sweet and salty relation between the two goes on. Besides their continuous trolling, they don’t step back to wish for success.

Previous article
Demi Moore and her daughters open up about how Ashton Kutcher made their relationship a mess!! Check out the details!!
Next article
“HIs Dark Materials”: Know everthing about the dark-fantasy which is being compared with Games of Thrones