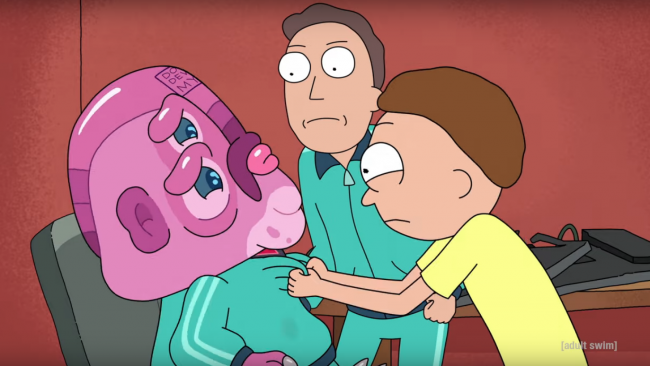 The long wait for Rick and Morty season 4 ends soon as the show returns to your television screens this November.

The trailer for the popular show was unveiled during San Diego Comic-Con 2019. The grandfather-grandson duo Rick and Morty will be back for another round of crazy adventures across space and time.

The adventure is set to become bigger and better than ever. Morty is pestering a purple alien – confirmed to be played by Taika Waititi. It looks like Morty wants the location of a mothership. Jerry is, well being Jerry. There is no sign of Rick or the other wonderful cast.

There is no clear indication of the plot. The makers seem to be holding back valuable information in order to further pique the audiences’ interest. Morty is looking for something that’s been uploaded to a server. But it’s not clear what.
In addition to that, we just know the Ominous Beeping App is going to become a reality soon. Well, this is the Rick and Morty way.

The hype for season 4 has been slowly gathering pace as time passes. The first images were also recently revealed. One includes Rick’s trip to a picturesque planet.

What the creators Have To Say About Rick and Morty.

The show creators Dan Harmon and Justin Roiland had some interesting tips for the audience before Season 4 starts. They urged the fans to watch the whole season 3 again as it will get more “serialized than ever before” in the new episodes. While fans had to wait for almost two years for Season 4, the next season is at the development stage.
Harmon revealed that “Rick and Morty” Season 5 is already in works as they put final touches on Season 4.

Season 4 is confirmed to have ten episodes. This time, a host of guest voice actors are set to appear. This includes Paul Giamatti, Kathleen Turner, Taika Waititi, and Sam Neill.