It is common for people to crave good company. And more so when you have just come out of a failed marriage. And Brad Pitt is doing precisely that. Sources say that Brad Pitt and Arrested Development’s Alia Shawkat are spending some quality time together. Recently, the paparazzi spotted the 55-year-old actor with Shawkat, recently attending an art gallery. And apparently that wasn’t the only outing the duo had. Sources say that they went out on multiple outings and were spotted a lot of times.

However, a source close to Pitt revealed that there was nothing romantic cooking between them as of now. They are just good friends.

We aren’t sure yet how the two met each other. But Pitt and Shawkat visited the Wilding Cran Gallery in Los Angeles for an exhibit. We came to know this through an Instagram post by Meral Melika Duran, who is an EU strategist. There he met the artist behind the beautiful artwork, Martin Werthmann.

Meral Melika Duran uploaded four shots of Pitt and Shawkat hanging out with the other guests and artists and talking to them. She captioned the picture with, “Supporting art and artist as usual. Thank you, Brad Pitt, for joining us. I had the pleasure to introduce my great artist friend Martin Werthmann to Brad (please check out his work). I had a very interesting conversation with Brad. Like [his] positive attitude.” Sweet. 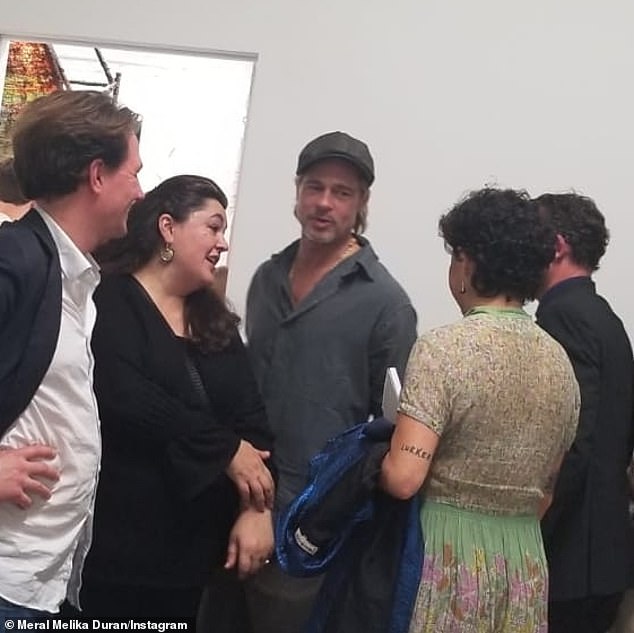 In the photos, Brad seems to be dressed up in plain casual wear, but of course, he can even pull that off easily. He was standing next to Shawkat and both of them were talking to other people. In another picture, both of them were chatting with each other. Sources also spotted them having dinner together that very night. They also attended Mike Birbiglia’s comedy show last month. In the show, both Pitt and Shawkat even posed for a selfie backstage. A Twitter user uploaded this picture but the user deleted its account.

After his split from Angelia Jolie, we have seen Pitt with multiple women but he hasn’t confirmed to be in a relationship with any of them. Shawkat is currently working on the fourth season of the Search Party for HBO Max. In the past, Shawkat has been linked to Michael Sera and singer and producer Jack Antonoff.