See also  All that We Know About This Year's MET GALA!!!
More
HomeEntertainmentMichelle Obama Gets Candid About her Unique Parenting Skills! Have a Look!

Michelle Obama Gets Candid About her Unique Parenting Skills! Have a Look! 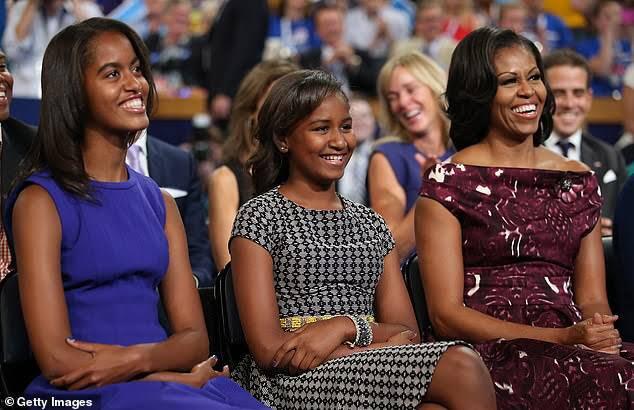 We all love Michelle Obama! Be it her intelligence or the way she always talks about women empowerment and lives by those ideas as well! Recently, a news release states how Michelle Obama has given her daughter a very important lesson in life.

This week, I’m excited to read “Miss Maple's Seeds” with @PBSKids and @PenguinRandomHouse. In this book we’ll hear from Miss Maple, who loves nature and celebrates the miracle that lives within every seed. I hope you and your child enjoy reading along this week. Share your child’s favorite part of the book in the comments below!

Michelle Obama Talking About Uniforms, Making Beds And More! Have A Look.

According to the former First Lady, the tuxedos just sent the wrong message to both Sasha and Malia who were young and as a mother, Michelle Obama didn’t want her daughters thinking that grown African American men serve them in tuxedos.

Last year while visiting my old high school, Whitney M. Young in Chicago, I met with a group of remarkable young women on the cusp of finishing school and figuring out who they are becoming. Elizabeth wasn’t sure why she was selected to meet with me that day. She didn't believe her story mattered. But as you will see here, her story is amazing and so is she. Elizabeth inspired me, and I think she will inspire you, too. I can't wait for you to tune in to BECOMING, now out on @Netflix. #IAmBecoming

Michelle Obama Opens Up About Certain Things In New Netflix Documentary And You Just Cannot Miss It!

Michelle Obama further added that she refused to raise girls who cannot even make their own beds! All these were revealed in the major new Netflix documentary about her called ‘Becoming’, which airs on Wednesday.

I couldn’t be happier that Julia Reichert, Steven Bognar, and all of the incredible people behind #AmericanFactory have been nominated for the Best Documentary Oscar. What Julia and Steve capture on film is at times painful, at times exhilarating, but always thoughtful and always real—exactly the kind of story Barack and I wanted to lift up with Higher Ground Productions. I hope you’ll see for yourself by checking it out on @Netflix.

The former first lady has always been very vocal about women rights, how important it is to be independent and other women related issues that needs utmost attention. The couple has also been candid about their parenting style when it come to their two daughters. You just cannot miss the nee Netflix documentary where Michelle Obama talks about several issues that will surely catch your attention for all the right reasons.

See also  All that We Know About This Year's MET GALA!!!