Kate Beckinsale and Ryan Reynolds cannot be in the same room!! The actress confessed On The Tonight Show ! 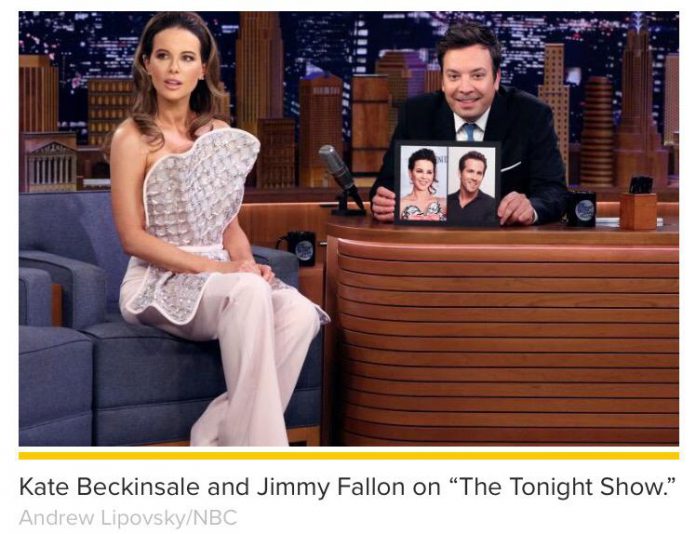 Kate Beckinsale Claims That She Looks Like Ryan Reynolds!

Apparently, Kate Beckinsale made an appearance app on The Tonight Show and belief that she has an uncanny resemblance with none other than Ryan Reynolds. She further says that she looks a lot like him in a shocking way! She had mistaken herself with Ryan Reynolds on several occasions and has wondered when was she a part of that movie after seeing a poster, then realizing that’s not her!

Jimmy Fallon Tried to Figure Out The Similarities It Seems but Failed Miserably!

Jimmy Fallon, on the other hand, was not quite convinced and did not find many similarities between the two celebs. Kate although said that Ryan is a big Canadian man, and she sees herself in him. She seems pretty convinced it seems! But she also claims that the universe cannot handle if they are in the same room together.

Moreover, Kate further says that they both cannot be in the same room. According to the actress, one of them would explode, or something would happen! She also says that some of her ex-boyfriends have been in the same room with Ryan Reynolds. Kate has earlier been linked with Saturday Night Live star Pete Davidson. The couple apparently broke up in April.

The episode on The Tonight Show was all about laughs after this confession from Kate. Jimmy even tried to figure out the similarities by putting both their pictures side by side. The actress is hellbent about the similarities, though. Let us see what the audience had to say about all this!

Previous article
Season 11 Episode 4 “Yellow Jack” :NCIS Is All Set With Another Exciting Episodes With Huge Turn Of Events ! Details Given Below.
Next article
Bojack Horseman Season 6: Can the viewers expect the amazing reviews to be written for the Sixth season? Checkout for Plot, Expectation and release date!!