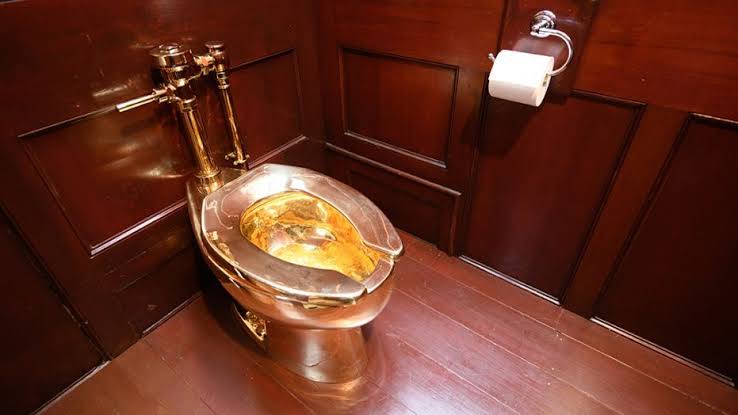 In a shocking incident, a golden toilet worth over $1 million has been stolen! The toilet has been stolen from the palace of the United Kingdom. The art had been installed at Blenheim Palace which is the birthplace of former Prime Minister, Winston Churchill. The art was made by Maurizio Cattelan.

This was a part of a functioning exhibition where people were invited to use a fully functioning golden toilet. The theft occurred on Saturday morning which happened two days after the installation of the toilet. The exhibition had opened on Thursday.

A burglary report was received by the Thames Valley Police at 4:57 a.m. on Saturday. The report said that the offenders had broken in overnight and left the place at about 4:50 a.m.

Detective Inspector Jess Milne of Thames Valley Police said, “The piece of art that has been stolen is a high-value toilet made out of gold that was on display at the palace.”

“Due to the toilet being plumbed into the building, this has caused significant damage and flooding Milne said in a police statement. “We believe a group of offenders used at least two vehicles during the offense.”

In an official statement by Blenheim Palace on Twitter, they said that they are deeply saddened by the unfortunate event but they are also glad about the fact that no one was hurt in the incident.

The statement also said that there was a huge interest in the Maurizio Cattelan exhibition with many people all set to come and enjoy the super precious installation.

There was a provision where visitors could book a three-minute appointment to use the toilet. This had been a popular feature when the installation was put for display at the Guggenheim in New York City.

A 66-year-old man has been arrested by Thames Valley Police who can have a probable connection with the theft. The name of the man and the charges faced by him have not been disclosed yet.

Chrissy Teigen celebrates her 6th wedding anniversary. Looks like she’s not so happy with husband John Legend.
Gwyneth Paltrow’s new post has taken everyone’s attention and caused an uproar among fans. Check out for details..