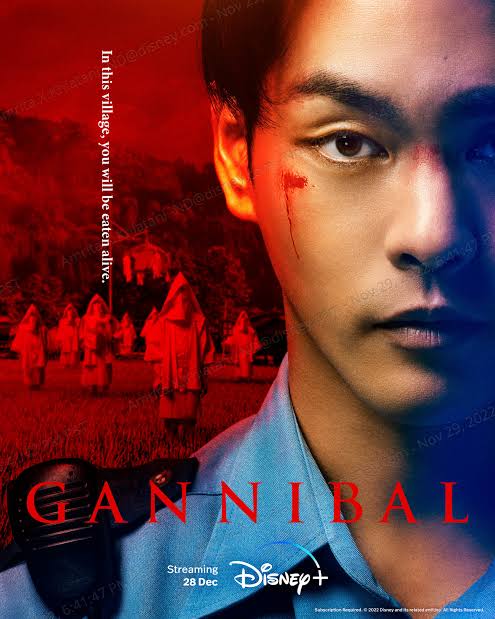 Disney+ has set up a release date for the upcoming Japanese original series, Gannibal, a psycho-thriller series. The first trailer for the most awaited Japanese series was released.

The psycho-thriller series is based on the best-selling manga by Masaaki Ninomiya named Gannibal as in the series.

The drama is adapted by the screenwriter by Takamasa Oe and produced by Teruhisa Yamamoto.

Both Takamasa Oe and Teruhisa Yamamoto were nominated for Oscars earlier this year for their work on Ryusuke Hamaguchi’s Academy Award-winning feature Drive My Car.

The Disney+ releasing date for the show worldwide is December 28 was revealed on Wednesday at the Walt Disney Co’s annual content showcase in Singapore. The first trailer for Gannibal was premiered at the event and then released on Youtube.

The Gannibal series showcases a fictional Japanese village in Kuge and follows a newly hired local police officer Daigo Agawa, played by Japanese star Yuya Yagira. The lead character Diago soon starts to realize, the horrifying realization that something is deeply wrong with the village.

He started to notice that those who live in the village of Kuge, were thrown into a hostile environment with suspense around every corner.

But the question lies that whether the latest police officer that roams the streets of Kuge village will be able to bring that responsibility to justice or not.

It is a thriller that will leave the audience gasping with shock after every episode was said by producer Teruhisa Yamamoto.

Yamamoto also said that Gannibal is a human story that reflects upon the difference between family values and culture.

At a glance, it seems contradictory and yet so relatable. The drama’s team and other Japanese local content will help in building a Disney rich history of storytelling that will be combined with Japanese culture and creativity.

The drama is directed by Shinzo Katayama and the other co-stars included are Show Kasamatsu and Riho Yoshioka.

Previous article
Miley Cyrus And Dolly Parton are on for ‘Miley’s New Year’s Eve Party’ as the host!!
Next article
That ’90s Show: Teaser Trailer for sequel series ‘That ’70s Show’ Retains the Vibe!