More
HomeEntertainmentDisney Jungle Cruise: What is the reason behind the delay? Check out...

Disney Jungle Cruise: What is the reason behind the delay? Check out all exclusive updates including cast, plot and more. 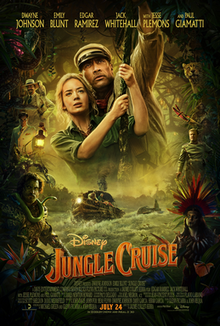 It seems like another highly anticipated movie has been pushed back for a later release and fans have to wait for a little while longer to witness all the action in this upcoming film.

Disney Movie Jungle Cruise Has Been Delayed For A Later Release In 2021.

The highly anticipated Disney movie Jungle Cruise starring Dwayne Johnson and Emily Blunt has been pushed back to a later release in 2021. This means that fans need to wait for a while to see this unlikely pair caught up in a dangerous adventure. Here’s what leading actor Dwayne Johnson has to say about the delay and how the film will be releasing when the world is in a much better place than it is at present.

The studio giant has to reconsider their decision keeping the current state in mind, and now Jungle Cruise will be releasing on 30th July 2021. This is not the only movie under the Disney banner that had to be pushed back, several other movies including some movies from Marvel Phase 4 had to face a similar fate as well.

Leading star  Dwayne Johnson has also addressed this new push back release date announcement, saying that he wants the movie to be released in a time when people around the world have more emotional confidence. The Jumanji star further added that the film will release has been pushed back and will be coming when people and the whole world will bounce back.

Jungle Cruise is not the only movie that is facing the delay issue, several big budget movies including Marvel’s Eternals, Black Widow are also facing a similar fate due to the pandemic terror.