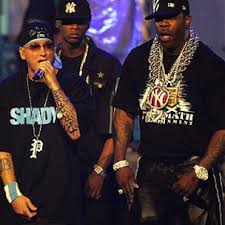 It seems like fans are about to find out something interesting about one of Eminem’s most popular work Calm Down! Busta Rhymes shared some interesting bits about the whole process of working with Eminem and Dr.Dre.

Busta Rhymes Talks About The Track Calm Down And More!

Eminem has always created several speculations around both his professional and personal life, while Busta Rhymes gives fans a glimpse into the whole process of how was to work with the rapping king of all time!

Busta Rhymes went on to reveal that initially the 2004 track Calm Down was not supposed to be so long but that Eminem kept coming up with new ways to improve the track and challenge him. While the two artists have also collaborated on other tracks as I’ll Hurt You and Touch It Remix, however, Calm Down went on to become one of the biggest hits of all times. Let us take a look back at the musical track that went on to become such a big success over time.

The Artist Admits That The Competitive Nature Brings Out The Best In Him And Eminem!

Moreover, Busta Rhymes confessed that he and Eminem had conflicted about the number of bar verse. Things went to such an extend that he thought that are they making this record for the consumer or are they just battling with each other now?. However, Busta also later added that the competitive nature between the is what served as an inspiration to keep going and to bring the best in them.

While the whole process did bring pout the conflicting nature between the two as both of them had a different approach, Busta said that he was very happy as Eminem took the project so seriously and it all worked out well in the end.

Sophie Turner Spotted in a Baby Blue Ski Suit with her husband Joe Jonas!!! PICS inside!!!
Season 4 of anime adaptation of Japanese light novel “Overload” is all set to roll out. Read the latest details below!