Becky Lynch Is Challenging The AEW Women’s Roster but Why?? 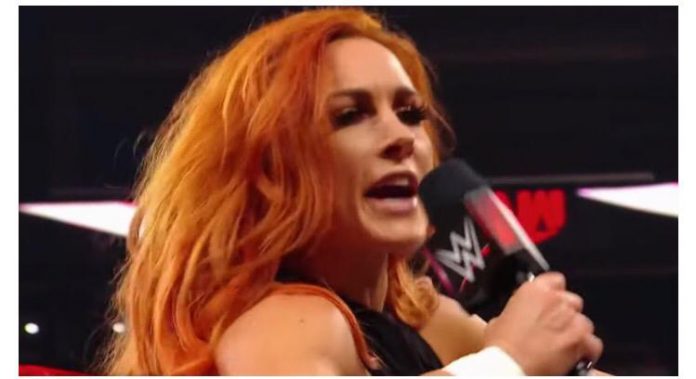 Sometimes celebrity debates can get ugly. Things become personal and can turn into a heated conversation. It seems like our very own Becky Lynch is not quite happy about a comment that was made about her fiance, who is none other than WWE Universal Champion Seth Rollins. Let us see what is the debate all about!

What Made Becky So Angry On Social Media?

Apparently, Jim Ross made some comments about Seth Rollins. Jim said that Seth’s future wife is more ’over’ than Seth is! Ouch! The comment soon created quite the buzz, and Becky obviously was not very happy about it. Ross continued talking about Rollins, saying he is indeed a great sport. Ross stated that he likes his work, but unfortunately, he will soon be over like his future wife.

How Did The Debate Become a Problematic Issue?

The debate soon became a heated one when Becky came in the scenario and challenged Jim Ross that she can single-handedly whoop or takedown the whole AEW Women Roster. Many people are saying that Becky may have come off as a bit too confident. Many women we’re quick to reply and said things like’ That Escalated Quickly.’

AEW member Nyla Rose also replied in a mocking tone that Becky might have underestimated and shared how much I like a challenge” meme. It seems that the debate is going to continue for a while. Things have sure to become personal, and both sides are not taking it well! 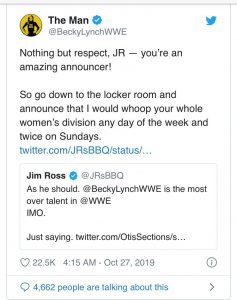 Everyone is wondering whether Becky is just lining up her fights. It would be interesting to see a fight between Becky and the AEW members. Let us see how this Twitter fight turns out and how far this debate goes. We have to wait and see what happens next for both sides.

Previous article
GOT showrunners Benioff and Weiss are no longer working on the Star Wars trilogy.
Next article
Emma Watson starring “Little Women” posters are out now! But the Posters have left everyone Confused and Disapponted! See why they are being Trolled on Twitter?