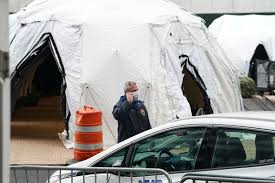 Forty five truck trailers has been bought by New York City  for the purpose of holding bodies, as a precautionary measure. This is an extra arrangement to store the bodies, if the city morgues and hospitals become full with the number of dead from the corona virus. Each truck trailer has a capacity of holding as many as 44 bodies. In addition to these ,the city has an additional capacity of holding 3600 bodies.

Till now, the city has been worst affected by COVID-19 as it has reported almost 200 deaths and about 18,000 cases. The measures are so far only a precaution, but all these point to feared scale of the epidemic in New York City. It shows that officials are planning for the worst.

Aja Worthy-Davis, a spokeswoman for the Office of Chief Medical Examiner is reported to say that already a large tent has been erected and trailers have been installed by the central morgue in lower Manhattan. City’s five morgues have a capacity of 800 to 900 as of now.

These trailers have been put outside major hospitals as a precautionary measure to prepare for the worst. She also added that they very much hope that it won’t be needed.These arrangements are made to ensure that a humanitarian treatment is given to the victims of the disease while they await transfer to a funeral home as said by Michael Lanotte, executive director of the New York State Funeral Directors Association.

A “Mass Fatality Management” plan is send by NYC to medical facilities which lays out the technical specifications for the trailers. These trailers are known as Body Collection Points. Funeral services in the state have been limited, with only immediate family members allowed to gather for private ceremonies, Lanotte added.