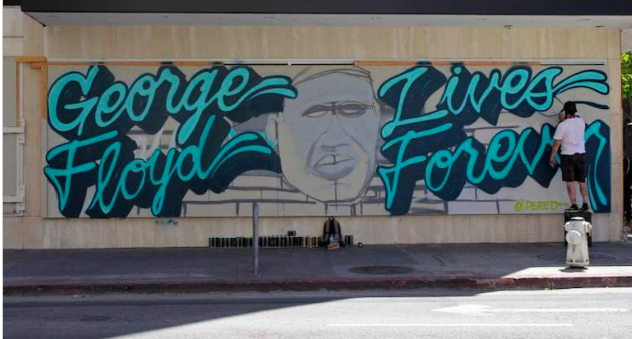 The recent video which got leaked about George Floyd and how he was treated by the police, has left the whole world angry and led to violent protests.

The video is so heartbreaking to watch and seeing such ill-treatment to people by the people we call our saviors- officers, has left everyone in a deep shock. What happened to him should not have happened. He was so unconscious when he was treated like that, he even mentioned he is not able to breathe.

George Floyd, who was 46 years old, died on the spot after he was arrested by some police officers outside a shop in Minneapolis, Minnesota.  It was revealed in a Footage that a white officer has pinned him down on the floor and has placed his knee over his chest for over 8 minutes, due to which he started feeling suffocated and even mentioned he cannot breathe, but the officer did not pay attention to that. After his sudden death, there have been several protests happening all over the world against the government and police’s brutality and against racism in specific. Everyone has left the lockdown, and came on the streets to protest for him.

Everyone around the world is feeling devastated about what happened to him? it was revealed by the sources and the medical reports, that he died because of asphyxia due to neck and back compression by the officer.

Several Hollywood celebrities  came forward and took a stand against racism and police brutality. His death is not unnoticed by a single celebrity, everyone around wants justice to be served to him.

Not only through social media, but some famous Hollywood stars such as Jonah Hill, Ellen Pompeo, and few others came to streets to support the protests and demand justice for George Floyd.

And those who could not join used their social media accounts to voice out their concerns and support the whole world in the protests that are happening!

to everyone reading this and to myself: keep researching, reading, and educating yourself on how we can become better allies. I’ve been doing a lot of thinking these past few days and my heart has been so heavy. I’m angry and hurt just like so many. I will never personally understand the fear and pain that the black community go through on a daily basis, but i know that nobody should have to live in constant fear. I acknowledge my white privilege and promise I will continue to educate myself on how I can help. raging on platforms can not be all that we do in order to repair the system, we need to take real action, off of social media. this is a time to have those uncomfortable conversations with people and mainly with ourselves. we must also make sure we are ready to vote when the time comes to elect the right people into office. the one truth that will always ring loudest is that BLACK LIVES MATTER. ❤️ rest peacefully George Floyd and all victims of this horrible injustice

George Floyd’s murder has sent shockwaves around the world, there are countless others that haven’t. Protests and marches are happening all over the globe simultaneously and only gaining momentum. So be righteously angered but be focused! Keep listening, keep asking and keep learning! It’s important we don’t get disheartened, hijacked or manipulated right now. This is about systematic racism, this is about police violence and it’s about inequality. And this isn’t only about America! Racism is alive and well everywhere. I wholeheartedly stand in solidarity with the fight for freedom, liberation and justice ♥️ #blacklivesmatter #georgefloyd #saytheirnames

When 4 black THUGS commit a crime, if 1 person commits murder, they ALL get charged & CONVICTED. When white THUGS/COPS KILL innocent black people, ALL 4 of them are responsible‼️‼️‼️ They all watched an unarmed man die and did nothing‼️ Why do they have different rules????? Let your voice be heard. Be angry. White people have been using violence against us since the beginning of time. We didn’t invent violence & looting. Will these officers actually get convicted? Probably not. Let your voice be heard. Call & TEXT to be a part of these petitions. May Mr. Floyd Rest In Peace.

Like so many of you, I am angry, outraged and heartbroken about the injustice in our country that has been going on for way too long- centuries & generations. To my fans, each one of us has a voice—I’m asking you to please use it right now. Please call the Minnesota Governor at 651-201-3400 and Attorney General to demand #justiceforGeorgeFloyd (link in bio for numbers and script from @aclumn). They need to be held accountable. We can’t stand by, we need to each do our part to make justice for everyone a reality.

since watching the most devastating and completely heartbreaking video showing the murder of George Floyd earlier this week I haven’t been able to get his face and his words out of my mind. i’ll never personally experience the pain and fear that many black people around the country go through every day but i know nobody should have to live in fear and nobody deserves a death like George Floyd and too many others. speaking up is long overdue for the rest of us. we’re currently dealing with two horrific pandemics in our country, and we can’t sit back and ignore the fact that racism is one of them. i fear for my daughter and i hope for a better future for her. my heart breaks for George Floyd’s family and friends. Don’t let his name be forgotten. keep sharing, keep watching, keep speaking out, because it’s the only way we can come together to help bring this much needed change and awareness. Rest In Peace, George Floyd. 🕊🤍

I do things every day without fear, because I am privileged, and I am privileged every day because I am white. Being not racist is not enough, we must be anti racist. Social change is enacted when a society mobilizes. I stand in solidarity with all of those protesting. I’m donating to help post bail for arrested organizers. Look inwards, educate yourself and others. LISTEN, READ, SHARE, DONATE and VOTE. ENOUGH IS ENOUGH. BLACK LIVES MATTER.

“Tiffany Trump”, the Only Trump who Supports Protests against Racism and Demands Justice for George Floyd
Even the judge has humiliated pedophile R Kelly and denied his request for release three times! Read for more details.